At the opening of the 6th Art Basel Hong Kong exhibition in Hong Kong, galleries from all over the world brought their most important works. In less than two hours, William de Kooning of Lévy Gorvy “Untitled XII” was for sold for $35 million USD during the VIP preview. This is the highest transaction price for the Hong Kong Art Fair this year, which is great news for the Asian art market.

Willem de Kooning (1904-1997) was born in Rotterdam, the Netherlands. He left school in 1916 and became an apprentice in a firm of commercial artists. Until 1924, he attended evening classes at the Academie van Beeldende Kunsten en Technische Wetenschappen (the academy of fine arts and applied sciences of Rotterdam), now the Willem de Kooning Academie. He moved to the United States in 1926 and supported himself with jobs in carpentry, house-painting and commercial art. After World War II, de Kooning developed a style that became known as Abstract expressionism or “action painting,” and was the soul of a group that later became known as the New York School. Other painters in this group included Jackson Pollock, Elaine de Kooning, Lee Krasner, Franz Kline, Arshile Gorky, Mark Rothko, Hans Hofmann, Adolph Gottlieb, Anne Ryan, Robert Motherwell, Philip Guston, Clyfford Still, and Richard Pousette-Dart. De Kooning’s favorite is painting the human body abstractly with his own artistic techniques. He integrated European Cubism, surrealism, and radical art into his own powerful expressionist style.

The painting was named “Untitled Xll” and was created in 1975. The size of the canvas was 202.6 x 177.2 cm, it was originally owned by Microsoft’s founder, Paul G. Allen, though the family recently decided to release it. When Lévy Gorvy included the painting in this year’s pre-sale catalog of the Hong Kong Basel Art Fair, it was immediately considered the highest priced art, which it well deserves the fame, and was quickly grabbed off the market by a wealthy buyer.

Below are a few of de Kooning’s high priced artworks:

On November 15, 2016, at New York Christie’s “After World War II & Contemporary Art Evening Auction,” the highest volume auction was Willem de Kooning’s (1904–1997) Untitled XXV, sold for US$66,327,500. The transaction created the highest auction record for this abstract expressionist masterpiece. Interestingly, 10 years ago, also at the same venue, this piece was sold for US$27,120,000. At that time, it set the auction record for post-war and contemporary works of art. 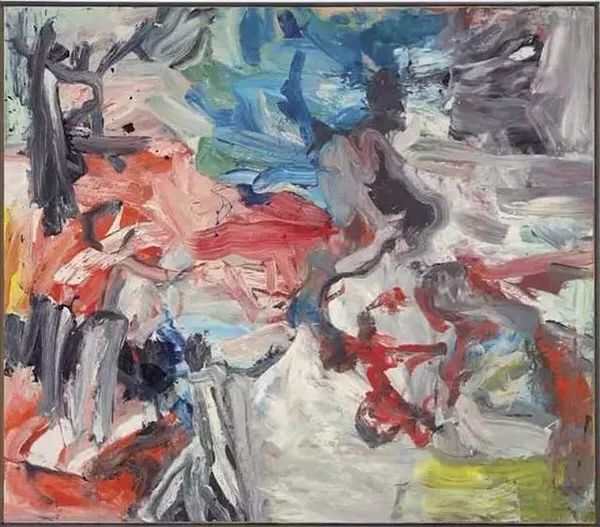 This work was sold for $17 million at the 2007 Christie’s auction in New York. When creating “Untitled I,” de Kooning was entering a new period of stability, which also heralds the coming of an important period of his artistic career. The work showed colorful paint splashes, vivid brush marks, and brushstrokes emphasis that conveyed a lively message. It highlighted the powerful color patches created by the brushstrokes together with the unblemished white background and smooth surface, which became the symbol of de Kooning’s works in the 1980s.

This work was sold for $17.5 million at Sotheby’s 2012 in New York and was called a masterpiece of the 20th century. “Abstraction” was created in 1940 and is one of the most peaceful and important works of the artist. In this work, the viewer can feel the interlinkages between the beautiful lines, the natural brushstrokes of the author and the vivid colors of the works. The work embodies the artist’s absorption of Cubism and surrealist ancestors’ nourishment, and it firmly establishes de Kooning’s leading position in gestural abstractions.

In 1989, William de Kooning’s “Interchange” auctioned for $18.8 million USD at the Sotheby’s auction in New York, becoming the first incident of contemporary artwork auctioned at the time. This work was created in 1995. The composition of the work is lively and the brushstroke is fierce. It combines the themes and techniques of de Kooning in the 1940s and 1950s.

Untitled XXI was sold for $22 million at Sotheby’s in 2015. Untitled XXI was an important piece of his work in the 1970s. During these years, de Kooning diluted the paint with water and added kerosene, benzene, or safflower oil as binding agents to increase the texture of the painting. With these material adjustments, the media of the work became thicker and with clay-like stickiness, reminiscent of the plump figure of bronze in his previous work.

This work was sold for $22 million USD at the Sotheby’s auction in November 2013, which was below the $25 million valuation. “Untitled V” brings together the energy of de Kooning’s painting language. He applied the use of these media to his outstanding artistic talents through techniques such as smearing, dripping paint, and blowing air.

Do you really know this abstract expressionist master who keeps on making record highs for the value of his painting?

A very handsome and talented artist

The meaning of abstract paintings is leaving white spaces, and that is the charm of it.

The world has never been perfect, there is no absolute; all orders can be broken, and angels can turn into demons. We are like de Kooning’s cream-colored angels, caught floating in the middle of heaven and hell. 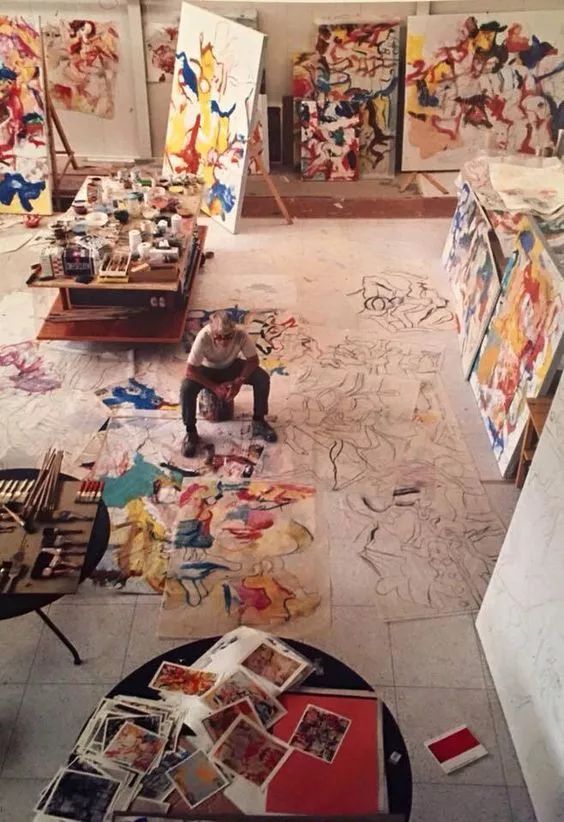 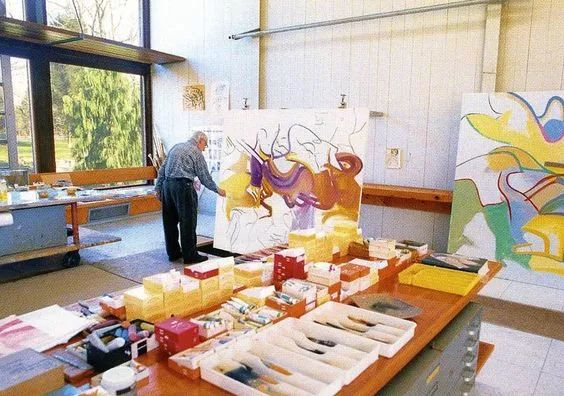 In 1927, he came to New York and relied on commercial art to make a living while continuing to paint. In New York, he met his lifelong friend Gorky (Gorky was The Father of Abstract Expressionism.  During his lifetime, he fought cancer and had a broken marriage, which resulted in him committing suicide by hanging himself). 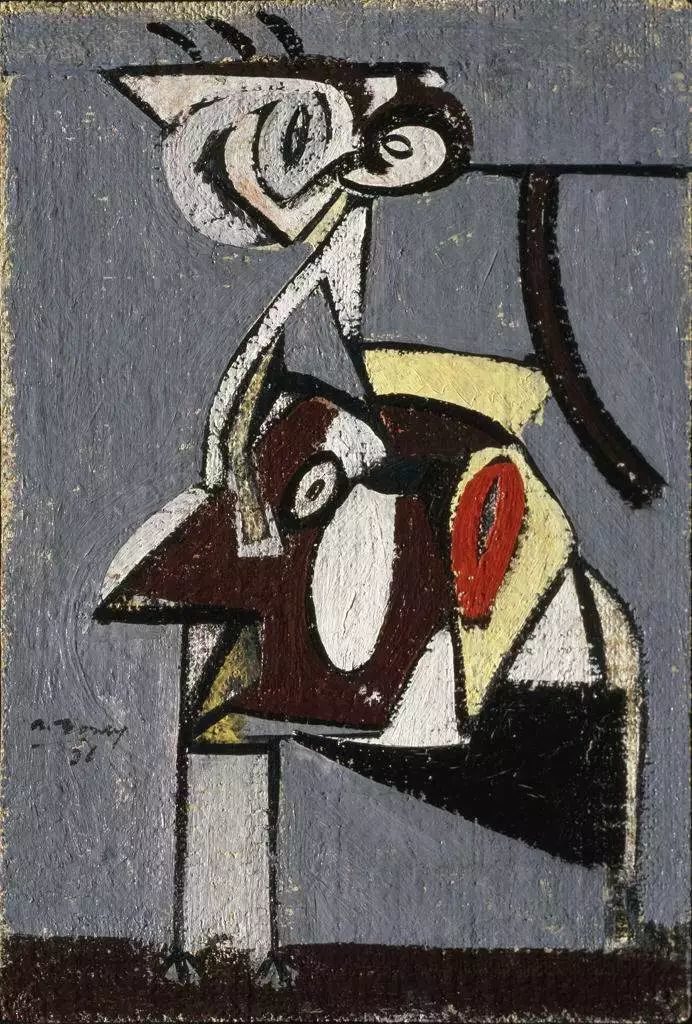 They painted together in a studio, observed each other to learn and influence.  Influenced by Gorky and Pollock,

de Kooning changed the way of early realism and tried to use the abstract forms of Picasso and Kandinsky as portraits. 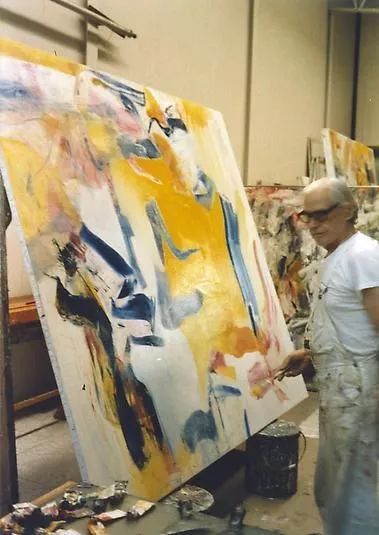 The fashion in the 1930s art world was Cubism and Surrealism. During World War II, the center of Western art has moved from Europe to New York.  The mixture of immigrant artists and Native American traditions led to the birth of new ideas and styles. 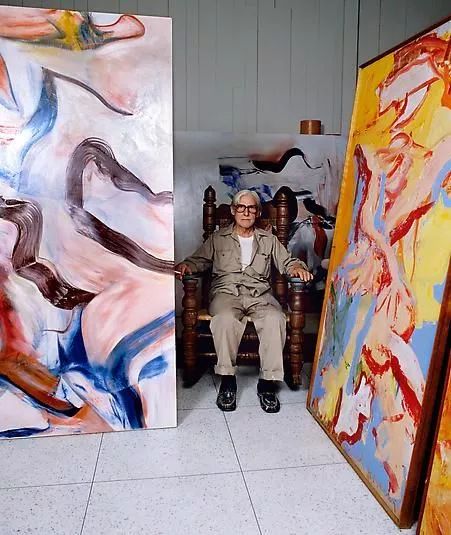 In the 40-50s era was when de Kooning’s personal style formed.  He actively cooperated with Gorky and Pollock, becoming one of the core members of American Abstract Expressionism.

The originality of de Kooning was fully demonstrated in the abstract works of the 1940s. His brushstrokes are swift, heavy and aggressive, with the use of various new materials such as black lacquer. The degree of decomposition of the images drawn was getting higher and higher, which fully expressed his restless mood. 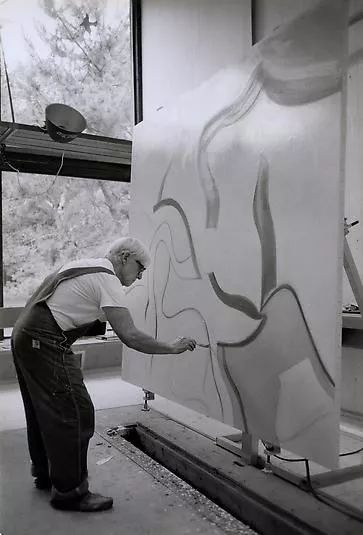 n 1948, the first personal exhibition was held at the Egan Gallery with black and white oil paintings created in the past two years. He had long been recognized by the art world for his reputation. The works of this period mainly depict portraits and nudity. The most representative work is a continuous series of female images.

De Kooning’s creation, these three series focused on the abstract, women and men. Among them, the most famous is the women’s series; it practically symbolizes his whole painting career. He saw painting as the process of experiencing, expressing, and achieving freedom. He painted passionately as one dance and used exaggerated gesture when engaged in painting. 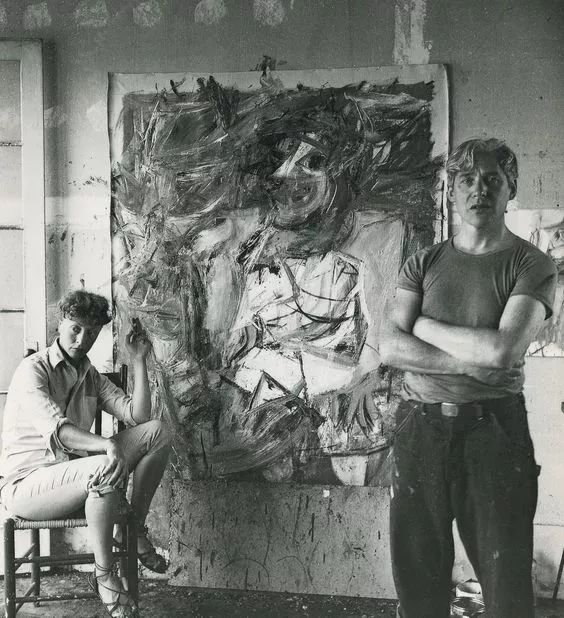 On his canvas, regardless of image or abstract content, there were no constraints; composition, space, perspective, balance, etc. The traditional painting techniques and aesthetic concepts were swept away.  He hated rules that put a boundary to painting and limit its potential. His brushstrokes were unusually bold and determined, as well as decisive and rapid.

Below are some of de Kooning paintings of passion and madness

(The following works have an average price of 100 million U.S. dollars) 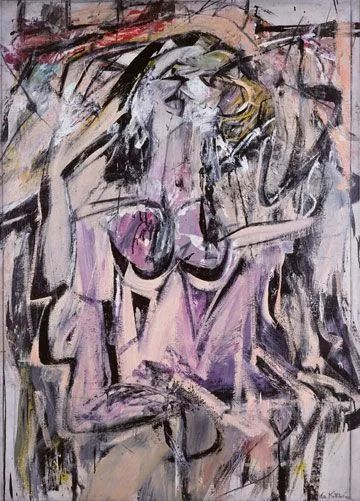 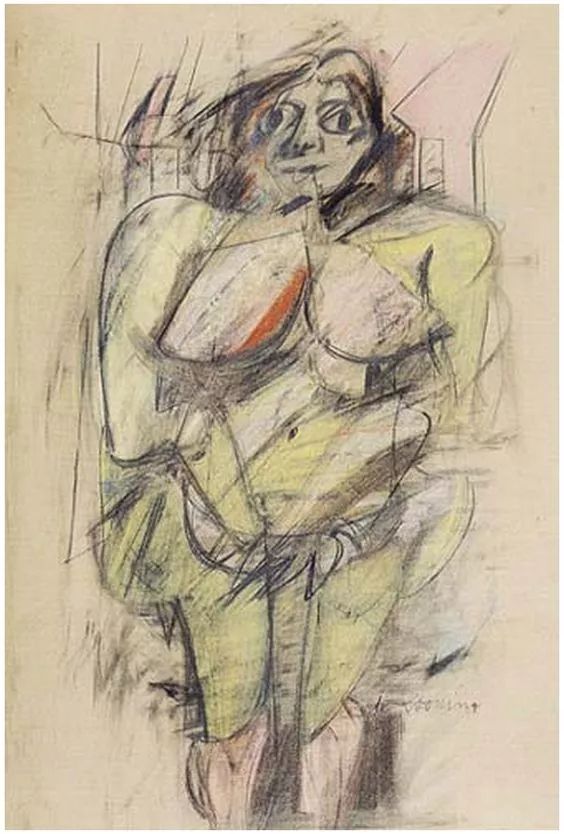 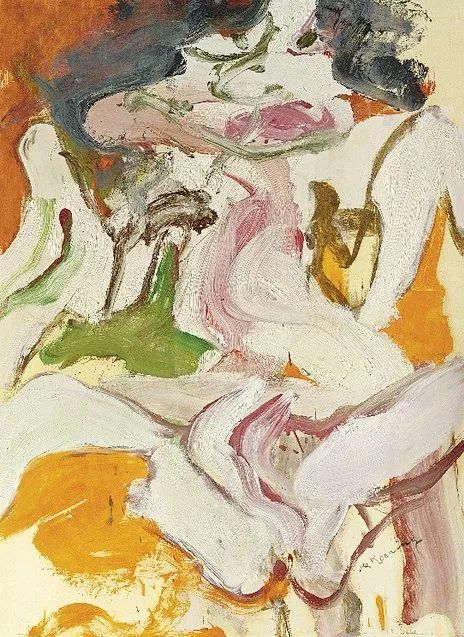 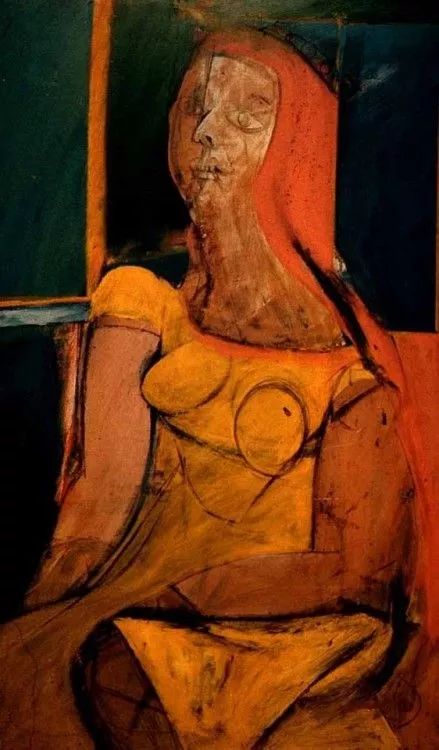 De Kooning was one of the soul figures of American abstract expressionism. In his creative career, the human body became the subject of his painting, and he added scenery and writing symbols to develop his abstract world. He blends the styles of European Cubism, Surrealism, and Expressionism with his own powerful painting behavior and melts the concept of radical art into his artistic world.

As the artistic master of a generation, de Kooning has left us with a variety of artistic language colors, sketches, sculptures and other forms of communication and sentiment for the viewers’ hearts and souls. Art has undergone tremendous changes, but as de Kooning said: “art is a tool for understanding life.”

About Ensemble 23 Articles
Ensemble magazine is a bilingual publication associated with Today Sotheby's International Realty with a focus on Architecture, Design, Creative Art and Fine Estates in San Francisco Bay Area and Around the World.
Website Facebook YouTube LinkedIn