It’s been another remarkable year for the jewelry sector: 2014 saw highly successful auctions worldwide, a host of records set for colorless and colored diamonds and huge interest in precious gemstones. Exceptional jewels can drive exceptional prices, as collectors compete to secure the rarest pieces of the highest quality. Although based in Geneva – arguably the centre of the auction world for jewels in recent years – Sotheby’s Chairman of Jewelry for Europe and the Middle East, David Bennett, has a resolutely global outlook. He shares his take on another jubilant year for this prestigious sector.

What are the most coveted categories driving the jewelry market?

Like most things, this field is governed by the law of supply and demand, and right now we’re seeing very high demand for the highest quality gems. Meanwhile, a scarcity of top quality stones means supply is restricted. Fancy-colored diamonds, for example, are the rarest of what is already a very rare commodity – and can be much more valuable than white stones. Among the most prized colors are pink, blue and yellow diamonds, and 2014 saw numerous records fall. In Geneva, we achieved a record with the 100.09-carat Graff Vivid Yellow diamond; in October, Hong Kong established a world record for an extremely rare Purplish-Pink diamond; and in New York, a stunning blue diamond from the collection of Mrs Paul Mellon set two records: for a blue diamond and per-carat for any diamond sold at auction.

The media often focus on large diamonds, but historically, rare coloured gemstones were held in very high regard. Is that still the case?

Absolutely. These stones were coveted for centuries, by kings and emperors, and they still hold magnetic appeal for knowledgeable collectors. Here, too, there is a very limited supply of top-tier gemstones which haven’t been heat-treated, in particular from regions known to produce the finest examples: Mogok in Burma for rubies; sapphires from Kashmir, and for emeralds, Colombia. Our November sale in Geneva set a world record with the Graff Ruby – truly a once-in-a-lifetime Burmese stone – and a world record for a Kashmir sapphire. Demand remains extremely strong. 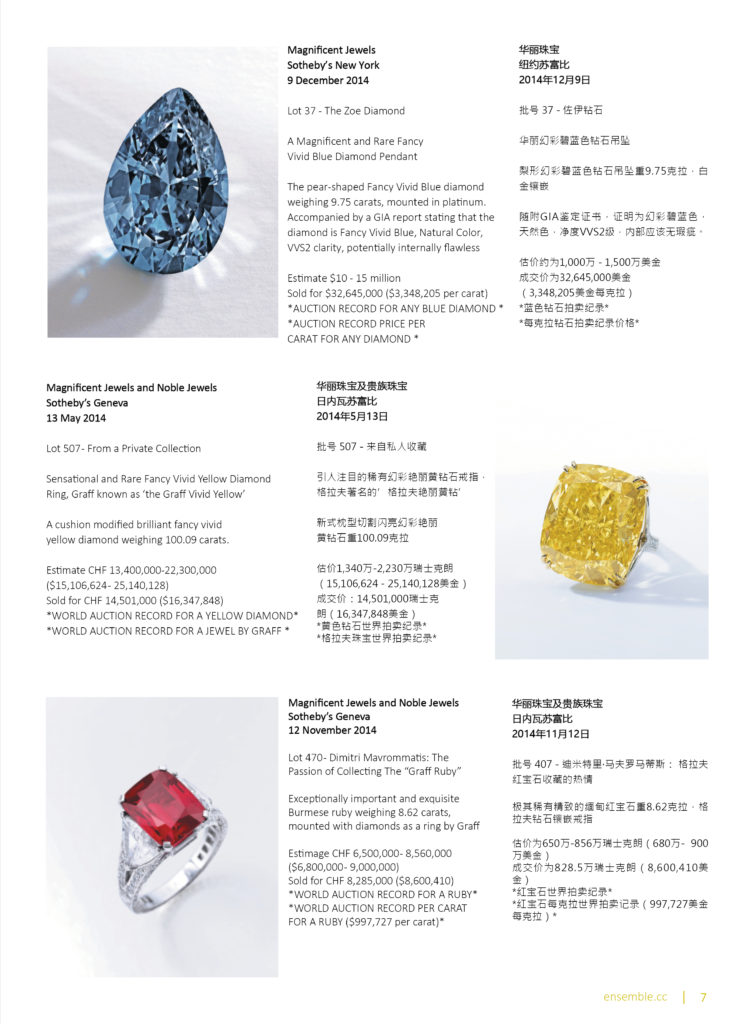 What other elements can add value, prompting more intense bidding at auction?

We have seen exceptional results for jewels which combine quality with illustrious provenance. For many people, knowing the history of a piece makes it more desirable. November offers a perfect example: in Geneva we presented a beautiful necklace of natural pearls which had belonged to Queen Joséphine of Sweden and Norway (1807-1876), and was probably inherited from Joséphine de Beauharnais, wife of Napoleon I (1763-1814). Added to this was the exceptional quality of the natural pearls, for which we’ve seen enormous enthusiasm in recent years. The necklace sold for more than double the pre-sale high estimate. We also have tremendous response for illustrious collections, such as that of the Duchess of Windsor in 2010 and jewels owned by Gina Lollobrigida in 2013. This year featured the exquisite collection of Mrs Paul Mellon in New York, and the stunning Dimitri Mavrommatis collection in Geneva. Finally, signed pieces by celebrated designers such as Cartier, Bulgari, Suzanne Belperron and JAR are always highly sought after.

How would you describe today’s market for jewelry?

The market is now truly global. My colleagues and I travel all over the world advising people on their jewelry collections. And our sales draw clients from all corners of the globe: in 2014 we recorded participation in our worldwide jewelry sales from 68 countries. The last three or four years in particular have seen very strong growth in this market, and our results are testament to that: this year we were delighted to see our worldwide sales exceed $600 million to reach the highest annual total for jewelry sales in Sotheby’s 270-year history.

Regarded internationally as an authority in the field of precious stones and jewellery. Mr Bennett was named among the top 10 most powerful people in the art world in December 2013 by the international magazine Art + Auction. In June 2014 he featured on the list of the top 50 “most influential persons in Switzerland” published by the Swiss financial and business magazine Bilan.

An auctioneer for the firm since 1978, Mr Bennett has presided over many record-breaking sales including the $46.2 million set by the “Graff Pink” – a 24.78 carat fancy intense pink diamond – in November 2010, the highest price ever paid for a gemstone or jewel. He is known as the “100-carat man” for the sale of seven 100-carat diamonds, including “The Mouawad Splendour” (1990) “The Star of the Season (1995), the “Lady Dalal” (2011) ,and the “Graff Vivid Yellow” (2014). Each of these stones established record prices for diamonds. Most recently, in November 2014, he established new record prices for a ruby (the ‘Graff Ruby’), and for a Kashmir sapphire; both stones were part of the celebrated Dimitri Mavrommatis collection of jewels. 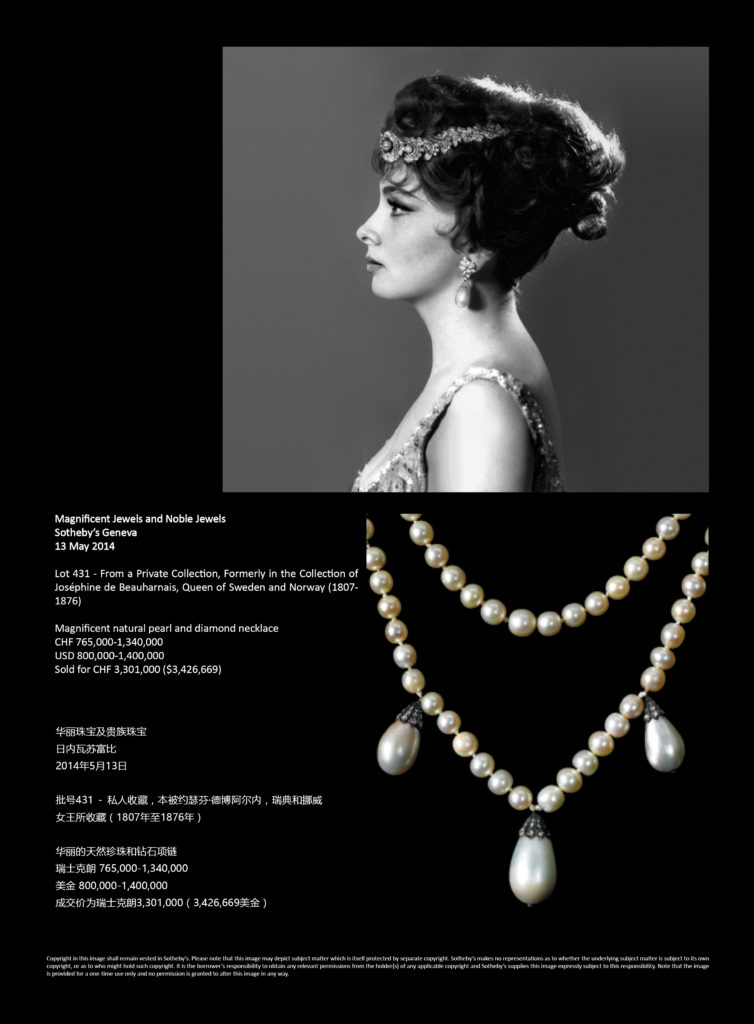 His long-standing expertise led him to be instrumental in such legendary sales as the “Jewels of the Duchess of Windsor” (1987) and the Princely Collections of Thurn und Taxis (1992). He also presided over the sale of the collections of Ava Gardner, H.H. Begum Sultan Mohamed Shah Aga Khan and Maria Callas, and most recently, in May 2013, the collection of screen legend Gina Lollobrigida. Under his leadership, Sotheby’s Geneva has presented jewels of supreme historical importance, among them: the legendary Beau Sancy, once the property of Henry IV of France, which sold in May 2012 for $9,699,618 (CHF 9,042,500), and in May 2011, a magnificent emerald and diamond tiara formerly in the Collection of Princess Katharina Henckel von Donnersmarck which fetched the record price of $12.7 million (CHF 11.3 million), a new landmark for a piece of antique jewellery.

David Bennett is co-author, with Daniela Mascetti, of the best-selling reference book Understanding Jewellery – which has been constantly in print since 1989. They have also co-written Celebrating Jewellery, (2012) published also in French as Célébration du Bijou.

Having graduated from university with a degree in philosophy, Mr Bennett continues to give talks in philosophy and related fields, as well as consultations in hermetic astrology.