Sotheby’s Contemporary Art Evening Auction on 7 March offers an exceptional selection of works by some of the most important and sought-after artists of the last 100 years. The sale is headlined by Peter Doig’s The Architect’s Home in the Ravine, and also features three masterpieces by Gerhard Richter (1025 Farben, 1974, Gelbgrün and Wind, both 1982) and David Hockey’s Different Kinds of Water Pouring into a Swimming Pool, Santa Monica, 1965.

Sotheby’s Contemporary Art Evening Auction offers an exceptional selection of works by some of the most important and sought-after artists of the last 100 years. The sale is headlined by Peter Doig’s The Architect’s Home in the Ravine: an important milestone in the artist’s career, when, just a year after graduating from his Master’s degree at Chelsea, he was awarded the highly prestigious Whitechapel Artist’s award. The auction boasts three masterpieces by Gerhard Richter (1025 Farben, 1974, Gelbgrün and Wind, both 1982) that embody key motifs in his career: photographic precision and iridescent abstraction. David Hockey’s Different Kinds of Water Pouring into a Swimming Pool, Santa Monica, 1965, is an enchanting play of pattern and texture, and introduces Hockney’s unique iconography. The sale also features an extraordinary work by Rudolf Stingel: Untitled, 2009, presents a hyperreal Alpine panorama, breath-taking in scope and detail, that eschews Romantic sentimentality in favour of a magnificent desolation and photographic precision. Spanning the postwar era, Pop art and the Pictures Generation, and the cutting-edge of contemporary art, the sale also features outstanding works by Christopher Wool, Jean-Michel Basquiat, Hurvin Anderson and Laura Owens.

Highlights on view in London:

Peter Doig
THE ARCHITECT’S HOME IN THE RAVINE

The Architect’s Home in the Ravine is as uncanny as it is inviting, coldly voyeuristic and blurred in dreamlike abstraction. Across the entirety of its complex composition, Doig conflates surface, and depth, distance and promixity, materiality and illusion.

This work marks an important milestone within Doig’s career. In 1991, only a year after graduating from his Master’s degree at Chelsea, he was awarded the highly prestigious Whitechapel Artist’s award. This early recognition spurred a period of intense painterly production and the resultant works are some of the most celebrated of his entire career. 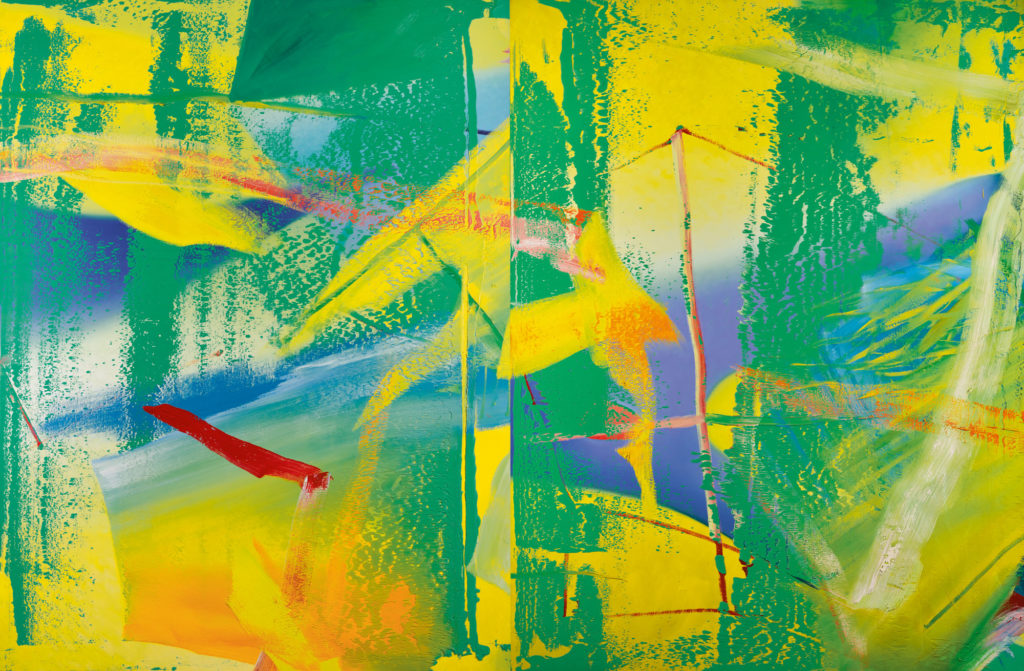 Comprising two panels that together extend to just over 4 metres in length, Gelbgrün is one of the very largest works by the artist, and a monumental exposition in abstract mark-making. It made its debut at the historic documenta 7 and has featured in countless museum surveys since. It encapsulates a newly realised yet pioneering and celebrated artistic direction. 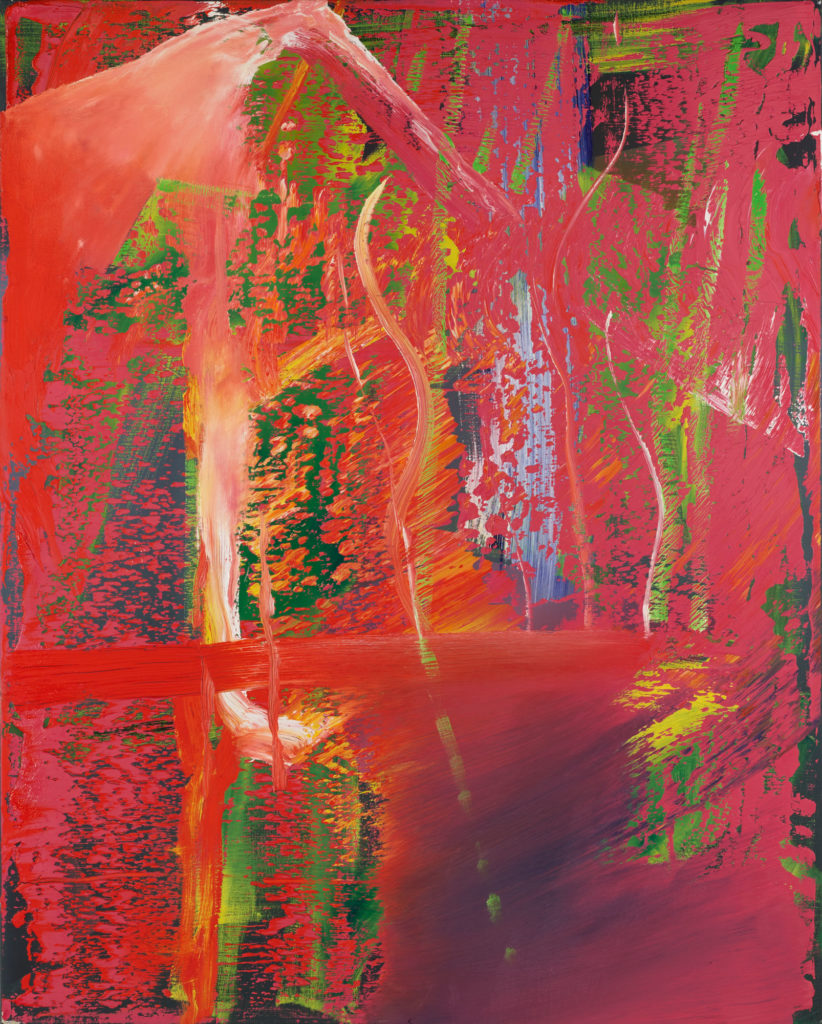 Wind is an exceptional abstract work from an important phase of Gerhard Richter’s career that has been in the same private collection for 25 years.

It is an essay in colour; a perfect example of the artist’s ability to variegate texture, timbre, tone, and hue in order to create paintings of stunning quality and astounding complexity. 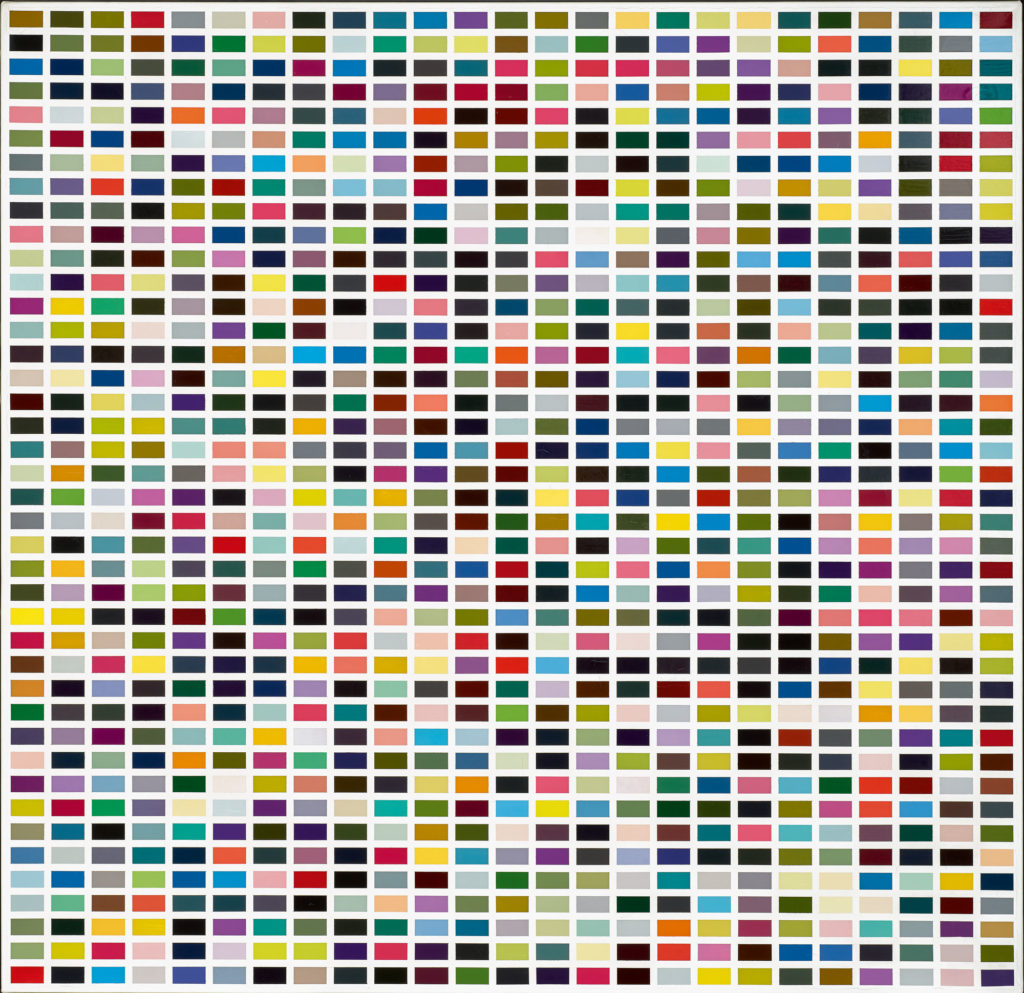 The artist’s first series of Farbtafeln or Colour Charts originated in 1966. They were intended, Richter explained, as “an assault on the falsity and religiosity of the way people glorified abstraction…”.

The present work is from the final series of Farbtafeln that occupied Richter throughout 1973 and 1974. In this series Richter added mixes of light grey, dark grey, and later, green, to generate an even wider range of colours. 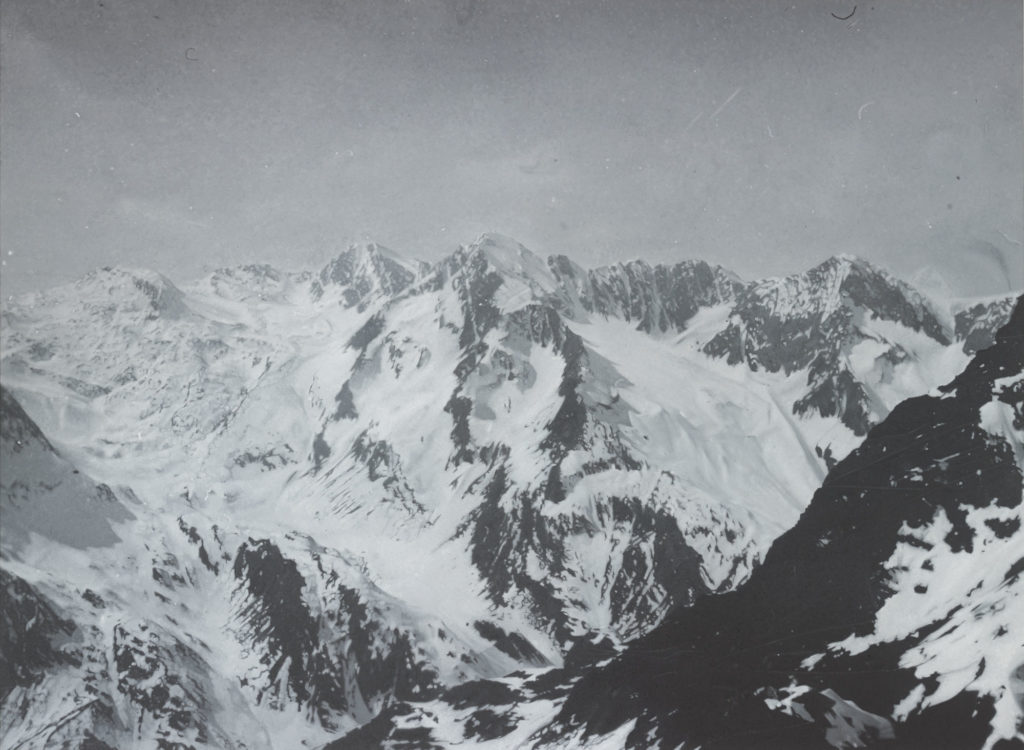 Belonging to a corpus of approximately twelve different yet equally monumental mountainscapes, Untitled was first exhibited with many others from the series as part of Rudolf Stingel: LIVE at the Neue Nationalgalerie in Berlin.

Together these pieces share nuanced signs of wear and individuated traces of age rendered in paint with minute monochrome precision. The result is paradoxically affecting: these works reinvigorate Romanticism for the post-modern and post-photographic age. 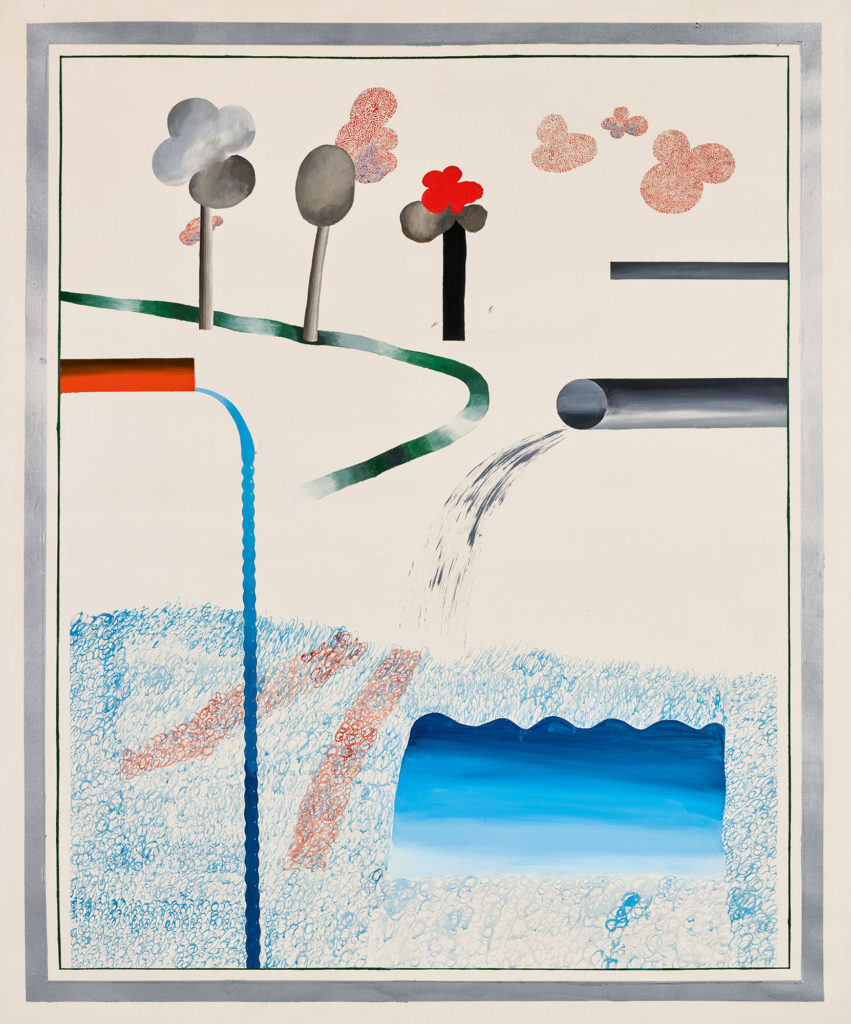 Different Kinds of Water Pouring into a Swimming Pool, Santa Monica delivers an extraordinary illustration of what is arguably David Hockney’s most iconic motif within his long and varied oeuvre: the swimming pool.

The great symbol of California’s outdoor pleasures – and an extremely exotic and sumptuous prospect for a young man from Bradford – the swimming pool plays the central role in Hockney’s output from 1963-1967. 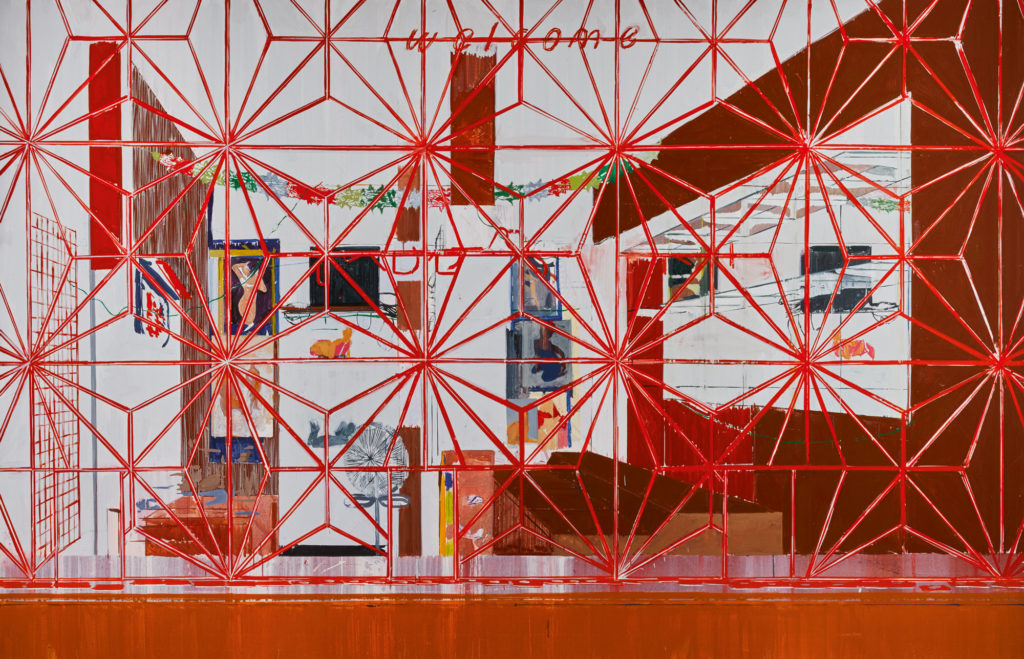 Peppered with half-remembered details of a place once visited, Some People (Welcome Series) is the strongest painting from a body of work that has had an immense impact on Hurvin Anderson’s practice.

A vibrant red and white interior scene is subdivided by a tessellating grille with each segment rendered a minute geometric abstraction by its interior frame. Punctuating details, such as the garland hanging across the ceiling of the room, the reflective top of the bar and, most noticeably, the posters of semi-naked women that plaster the walls, lend the scene a sense of familiarity. 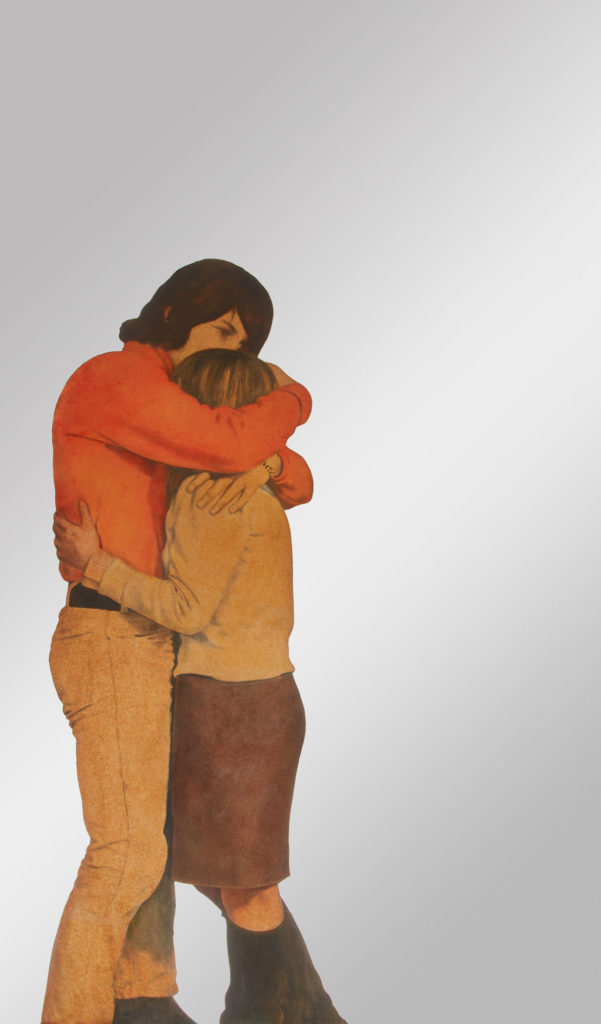 In 1962, Michelangelo Pistoletto transformed the intimate moment of a couple’s passionate embrace into an artistic spectacle.

A snapshot of two lovers presented on a reflective mirrored surface, Amanti (Lovers) is a seminal example of Pistoletto’s most recognisable and celebrated series, the Quadri Specchiatior Mirror Paintings. By inviting the viewer into a complex reciprocal dialogue with the intermediary figures in the painting, the spectator becomes a voyeuristic bystander in a very private moment.