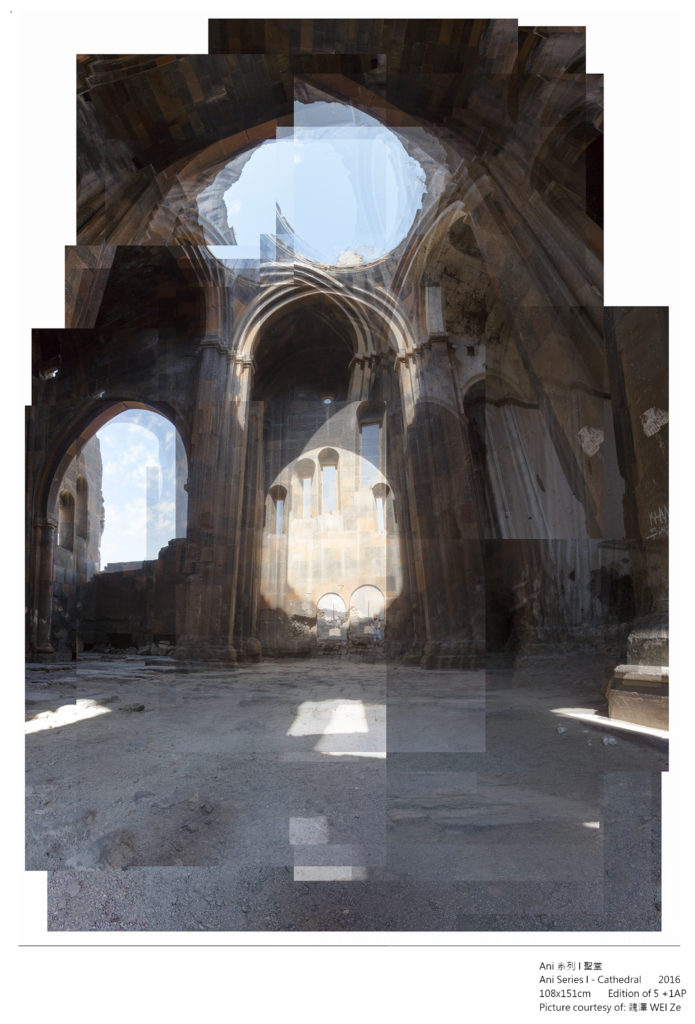 No artists would claim that their art is solely the product of their own invention without any reference to and inspiration from tradition, memory and personal experience. The underlying accumulation of these is the source of artistic innovation. The richer cultural tradition artists possess, the clearer will their artistic sensibility be manifested.

Taiwanese society has a very strong marine culture character, which is a society with fluidity, openness, and diversity. The cultures of Taiwan are a hybrid blend of various sources, incorporating elements of traditional Chinese culture, attributable to the historical and ancestral origin of the majority of its current residents, Japanese culture, traditional Confucianist beliefs, and increasingly Western values.

The diversity of Taiwan’s culture is closely related to power transitions. The island of Taiwan was mainly inhabited by aboriginal Taiwanese before Han Chinese began immigrating to the island in the 17th century. Since the early 17th century, there were several power transitions; Taiwan was under colonial Dutch rule for 38 years (1624-1662), followed by the Kingdom of Tungning (1662-1683) and Qing dynasty (1683-1895), and then Taiwan was later ceded to Japan in 1895 after China was defeated in war. Taiwan was under Japanese rule for half of a century until the Nationalist government took over at the end of World War II in 1945.

Taiwanese photography is deeply rooted in the country’s unique and rapidly changing history. Its early photography is often divided into two periods: Pre-Japanese from approximately 1858 to 1895 during which time much of the photography was conducted by foreign missionaries and merchants, and an era of Japanese Influence from 1895 to 1945, in which many photographs have been preserved as postcards. The era of contemporary photography began with the end of Japanese rule. Chang Tsai, Deng Nan-guang and Lee Ming-diao, collectively known as the “three swordsmen”, are among the best known of the Taiwanese photographers who were active in the 1930s to 1950s. From the 1960s onwards, the art world in Taiwan was strongly influenced by the artistic trend in the United States.

Since the 1970s, new color photography and new topography photography moved into full swing in the United States, and Taiwan was also influenced by the new trend. In 1975, William Jenkins curated an exhibition called “New Topographic: Photographs of a Man-Altered Landscape” at the International Photography at the George Eastman House in New York. Differentiated from traditional landscape photography, the exhibition brought a new perspective to landscape photography that focused on an objective documentation of locations, and the aesthetic value of social and culture contexts were embedded in the pictures, which were stripped of any artistic frills and reduced to an essentially topographic state, conveying substantial amounts of visual information but eschewing entirely the aspects of beauty, emotion and opinion. New Topographic also emphasized the relationship between man and nature through the documentation of industrial intrusions on land and scenes of suburban sprawl, motels, and parking lots.

The visual history created by Taiwanese photography reflects the process of visual reconstruction based on the change from the colonial to post colonial era. Beginning in the 1980s, realistic photography began to ask “What is Taiwan?” Some used the method of recording the omnipresent of “colonial remains” to find answers, while others ignore the colonial remains, but instead used the locals’ stories to reconstruct images of historical paths and memories. This became the earliest experience in the search for a Taiwanese identity in the post war period. In the end of the 1980s, Taiwan experienced a rapid change in the society, which laid perfect groundwork for the 1990s to establish a multicultural civil society with progress in democracy. The lifting of martial law and the repealing of bans on the establishment of newspapers and political parties in the late 1980s stimulated the domestic art scene and supported the diversification of photography in Taiwan. Nowadays, how people think of photography is totally different from what it used to be throughout its history. It is considered to be an artistic expression which should reveal the truth of the society with sensitivity. Since the 1990s, the development of Taiwan’s photographic arts has followed the trend of contemporary art in terms of form and content. Art and creativity were to serve the needs of the society. As a result Taiwanese photography entered an era in which it became far more critical on political, societal, communal, cultural and gender issues. At this point, photography became much more than a tool of consumption and was transformed into a vehicle for the showcasing of new ideas on the reformulation of history, opposition to otherness and the establishment of cultural subjectivity and identity in the post war period.

Currently the photographic arts in Taiwan can be categorized as follows. (1) Post-modernist photography – photography as a way to deal with artistic concepts, including conceptual projects, performance arts, happenings, art design/strategy, or the re-visualization and reproduction of visual text. (2) Staged photography – photography featuring tableau–like single-frame image to crystallize the whole visual narrative. (3) Photography of “cold reality” – photography highlighting the absence of visual dynamics and sentiments to maintain certain objective gaze. (4) Photography of objects/ raison d’être – photography adopting certain expression to transform the significance of the objects in real life and maintain their materiality to create an on-going discussion between the objects and the subjects/themes. (5) Photography of private life – photography revealing family life and intimate relationship. The plain, straightforward, honest, and unique narrations accompanied by strong and subjective emotions are often associated with personal confession or diary. (6) Photography of the “moment” – Photography has always demonstrated a documentary power to witness the events of humans’ lives. Therefore, the social realism revealed through photography offers it a crucial place in press coverage. However, as digital media becomes the most direct information source, the ordinariness and the instantaneous of photo documentary challenges photographers to search for a “new documentary” through artistic expression and documentation.

The nature of photography is to find and to record. Fine art photography; however, is created not for commercial purpose but in accordance with the vision of the artist as photographer; messages are conveyed through the lens, and the pictures themselves reflect the artist’s thoughts, emotions, introspection, intuition, and so on. As the definition in The photography encyclopedia by Gloria S. McDarrah: “Photography that is done as a fine art — that is, done to express the artist’s perceptions and emotions and to share them with others.”

Born in 1985. Photography and video artist. Superior National Diploma of Artistic Expression from Marseille-Méditerranean Art and Design Academy. Master of Fine Art from National Taiwan Normal University. Has participated in several solo and group exhibitions since 2005.

Being a history lover and an artist, WEI Ze’s artworks are inspired by how historical context influence upon the contemporary surroundings. Wei Ze visited Ani in 2013 for the first time; it was a five-month stay, and she returned to the city twice in 2014 and 2016, respectively. Ani is a ruined medieval Armenian city situated in the Turkish province of Kars near the closed border with Armenia. Long ago renowned for its splendor and magnificence, Ani was sacked by the Mongols in 1236 and devastated in a 1319 earthquake, after which it was reduced to a village and gradually abandoned and largely forgotten by the 17th century. Ani is a widely recognized cultural, religious, and national heritage symbol for Armenians. “This used to be our home.” The sentence is short yet devastating. Based on the concept of experimental history, the Ani series engages in the discussion of the two terms, territory and boundary. Throughout de-constructing and re-constructing, it takes hundreds of photographs to complete one piece of work, in which there is no one fine line to clearly configure the historical remains. Ani’s work suggests that the consciousness of national boundaries and national identity exists only in one’s heart. 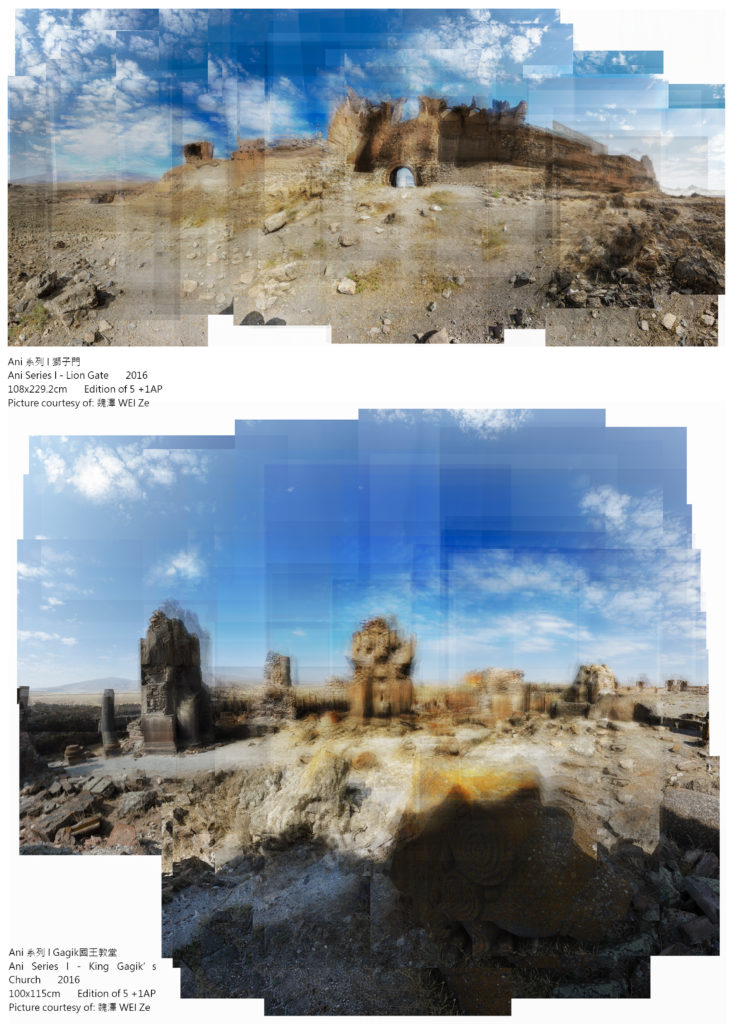 Born in 1994. Photography artist. Director and founder of G.Gallery based in Taipei. Curator of “Wonder Foto Day”.

Shinra means “everybeing between earth and heaven”. In old-fashioned stores, thousands of products could be found in towering stacks, often undisturbed for great lengths of time. They seem to be waiting iwth anxious expectation to capture the attention of a purchaser. The photos depict this kind of “waiting room” assemblage of products, silently waiting for the realization of their respective fates. The photographer also aims at capturing the way individuals deal with time. The settings in which each scene is depicted have an oppressive atmosphere. There is a fragility and darkness in the series which echo unstable economic, social , and political changes in recent years of Taiwan’s history. Color is used in the photography as a means to express the traces of the mind; the color composition brings a sense of resolution and appeasement. As the objects in the shop patiently await their destiny in defiance of outside threats and obstacles, so we await our destinies, knowing that the wait is worthwhile. 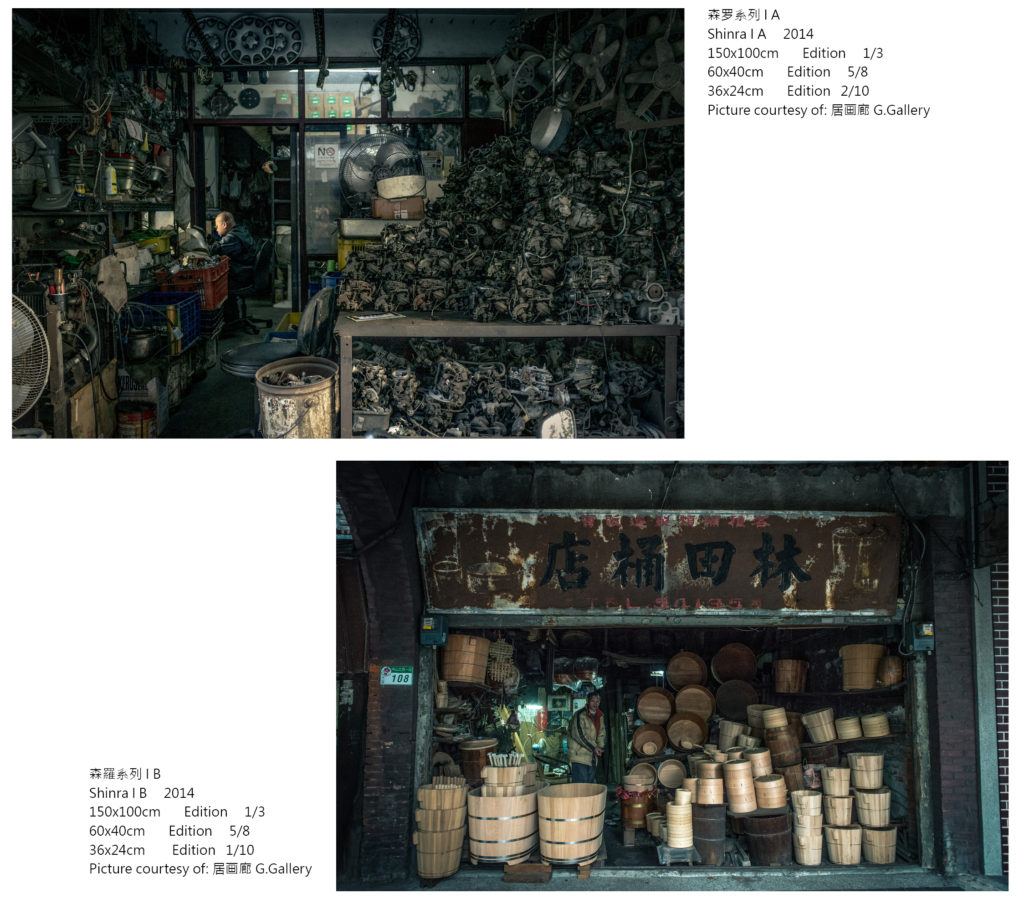 Born in 1970. Photography artist and curator. Has participated in several solo and group exhibitions since 2008 and won photography prizes and awards many times.

The Landscape Shaped series subtly transfers sandy coastal sceneries to traditional Chinese landscape paintings by shooting from an aerial perspective. Ma Li Chun makes the optical illusion casual and lighthearted; however, the confusion encourages the audience to rethink about current living environment. As the negative side effects of industrial development and material civilization expand, the beautiful nature might eventually only leave a pinch of sand underfoot for the human beings. From a simulacra point of view to bring out the shapes and layers of traditional landscape paintings, this series seems to speak out for the modern desire to embrace the Mother Nature.

Born in 1968 in Normandy, France. A native French gentleman with Taiwanese soul. Moved to Mainland China in 1993 and currently lives in Taipei. Photography artist. Director of Cellier Wine Gallery based in Taipei.

“The first time I discovered negative filter in the camera, I couldn’t believe I found another world hidden in our daily life”, Kayoumin said. The Not Totally Negative series seems to tell a mysterious story that ancient power revives in modern society. The major difference from other photography effects is that negative filter does not alter the image; it only reverts the colors and brightness. When the colors and brightness are reversed, something unexpectedly beautiful becomes evident. The creative process is about capturing the right angle and timing; sometimes by sheer luck and other times by intentional acts to get a great composition. While the negative filter effect is not a result of any special planning or technique, the audience often perceive Kayoumin’s pieces as paintings or drawings. By printing the pictures on canvas, Kayoumin gives each piece its own identity. With the artist’s personal sense of humor this series not only well integrates the essence of Western and Eastern cultural values but also delivers the message to motivate the audience to think outside the box. These works satisfy the appetite in Taiwan for innovative abilities. 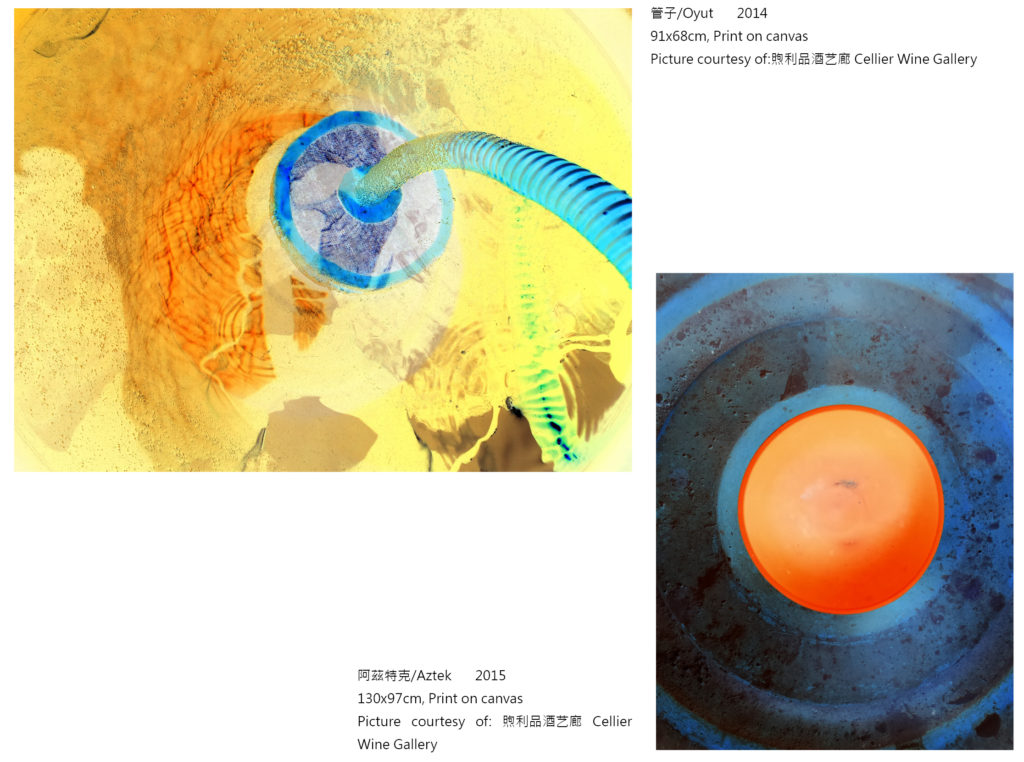