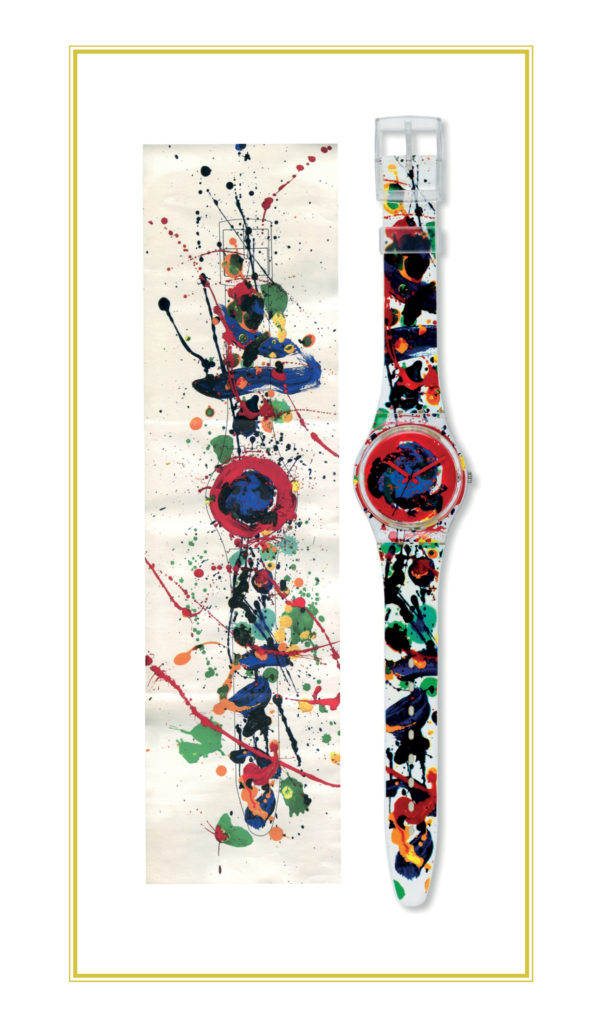 Swatch is revolution: It has given an enormous boost to the market and industry of watch-making and it changed the concept of the timepiece and it is worn.

The timepiece according to Swatch, is an object that conveys innovation and irony.

A Swatch watch is always iconic, because it goes beyond what it is, it suggests styles and trends.

This object has not only the classic function to mark the time, but it becomes a fashion accessory, to choose, buy and change depending on the style apparel, curiosity, inspiration of the moment.

Swatch overturns the concept of classic watch. The precious materials are replaced with plastic and the precious value of the object is replaced with that of an object whose preciousness is due to its rarity.

Swatch watches are theoretically infinitely reproducible, but practically they are produced in limited editions. What makes them unique is their continuous transformation, a series of metamorphoses that interpret and present forms, taste and contemporary thought. Thanks to its flexibility and its eclectic soul, plastic is very suitable because it can be used be used in combination with other materials: beads, feathers, rhinestones, glass and metals. It can also take endless colour options, allowing designers to continually renew the models in constant metamorphosis. Since 1983, thousands of distinct limited edition models have been designed and produced.

The adventure of Swatch began in the Seventies. One of the great ideas of Nicolas G. Hayek was to propose a “second watch”, not an expensive item of fine jewelry, but a new and fascinating object through which we can express our personalities. Considering its affordable price, the second watch is followed by a third, a fourth, and so on.

In 1982 the first Swatch watch was launched in the US market and in 1983 in Switzerland. What followed was a phenomenally successful market reception. 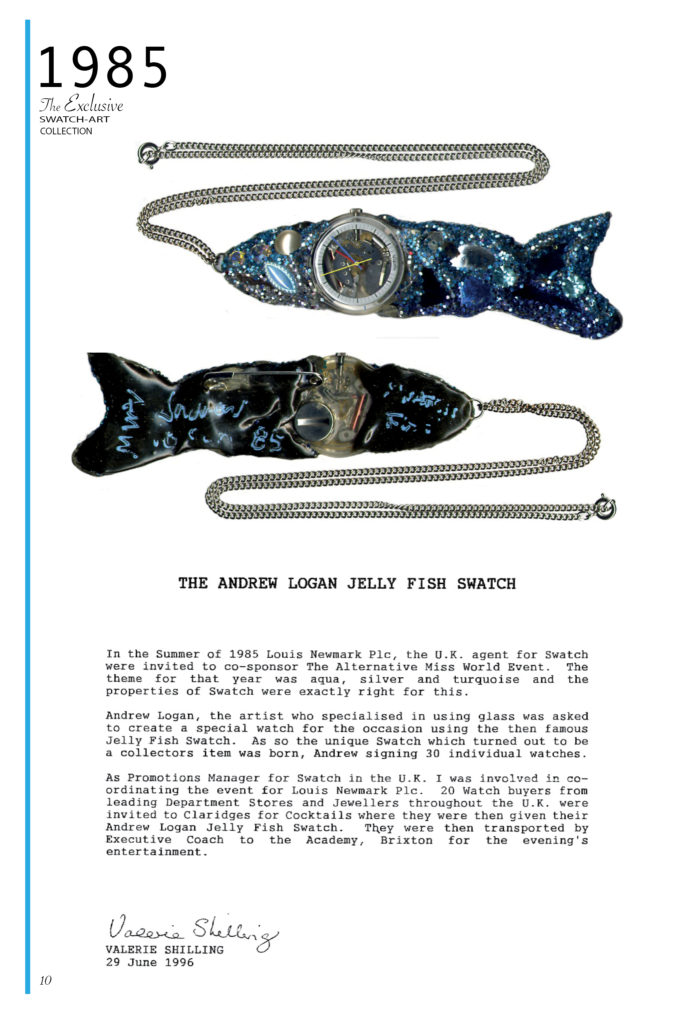 From the beginning, Swatch has been linked to art. Swatch watches were inspired by popular culture and in a short time they became a means of expression for painters, sculptors, musicians and filmmakers. Due to their popularity and the limited production of each model, Swatch watches began to emerge on the auction scene to be collected like famed works of art. Among the Swatch Art we remember there are those created by Sam Francis, Mimmo Paladino, Andrew Logan, Kiki Picasso, Arnaldo Pomodoro, to name a few.

NOTES FROM THE COLLECTOR

It has been a wonderful adventure to follow the path Swatch has journeyed from its revolutionary introduction to the market of teleologically innovative watches that stimulated a major revival in Swiss watchmaking.

The moment they were first introduced in 1983, I bought my first Swatch watch, a black GB100 with a white face very optologic and I was thoroughly satisfied by its perfect operation and quality. I immediately recognized the profound new marketing concept which I envisioned reaching to a far wider market than the traditional Swiss watch marketplace. Already in the first historical Swatch assortment, I could see the artistic intent that some models presented, materialized with the Swatch Art “Kiki Picasso”, signed by the French artist Christian Chapiron. It was a resounding success of image. Even the rare brooch “Jelly Fish”, handmade by Andrew Logan, which was authorized by Swatch for a Drag-Queen competition in London in 1985, was a tremendous success, followed by Tadanori Yokoo, Keith Haring, Folon, Christian Lacroix, Mimmo Paladino, Vivienne Westwood, Mimmo Rotella, Sam Francis, Mark Kostabi and Arnaldo Pomodoro. Note that these Arts models were produced in very limited production quantities and are rare and difficult to acquire. It is with great pleasure that I have succeeded in acquiring them and including them in this collection. My first historical range 1983-2000 can be considered the most complete and comprises in addition to the models Gents and Ladies also a new fashionable watch, the colorful Swatch Pop, which was launched in 1986. 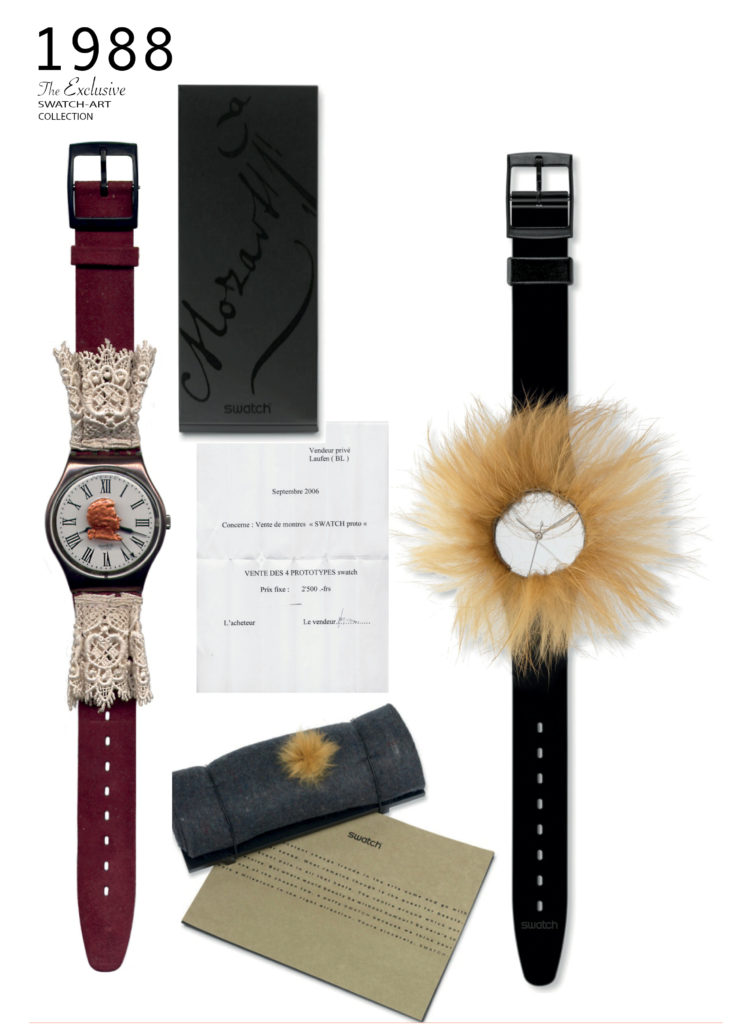 Noted exceptional rarities in the collection include all of the collection we can find all Fachhandellogo, whose distribution was reserved only for Swiss watch retailers, followed by the Davos Symposium, distributed in 1985 at the World Congress of Davos to celebrate the presence of the Nobel Peace Prize Henry Kissinger. The stellar list continues with the two Velvet Underground, Sir Limelight, Bergstrusseli, the Special Puff, Maeght Foundation, Peter Frueh, Bonaparte, Pop Diva, Pop En- cantador, Mozart, Jelly Fish, Hollywood Dream, the three Vegetables of A. Hofkunst, the four Swiss Special, Platinum Tresor Magique, MoMa, Montreaux Jazz Festival, Golden Jel- ly, Crystal Surprise, Garden Turf, Space Dream and many others. Special series such as the various “Olympic Specials” and Victory Set Big Box and many beautiful Limited Special Packaging editions are also in the collection. In addition, since 2003, having participated in all the events organized by the World Museum of Fiorenzo Barindelli, in Cesano Maderno, I was able to see and select from the internationally most exciting design personalities of Swatch watches.
The collection has been expanded with several particular models as such Place Vendome in Paris and Via della Spiga (the road of high fashion in Milan). I also highlight the five watches “1800”, each models entirely decorated with images of the 19th century and presented in the collage “Timestory” by Lorenzo Petrantoni (Berlin 2013).

My collection did not overlook the technological development of the Swatch Chrono, that had a huge demand, followed by the Automatic Irony models, from the metal case embossed fusion and the great success of the Skin Collection launched in 1997, whose main feature is its size, from only 3.2 mm thick and so far the thinnest Swatch watch. The Skins have a refined beauty, appreciated by women in particular and my collection also it involves the four models in which each is embedded with 174 precious stones like diamonds, rubies and sapphires.

But, as everything has a beginning, at some point it has a conclusion. It is with great pleasure that I present this important collection of over 3700 pieces, signed with the latest technology event by four models Swatch. Last but not least is System 51, the only Swatch timepiece with automatic movement with 51 components, one screw and 90 hours of power reserve, with a dial denoting artistic research.

It’s a great satisfaction to certify for “THE EXCLUSIVE SWATCH-ART COLLECTION” the most largest Private Collection of Swatch watches known to me, consisting of Standard Models (Gents and Ladies), Chronos, Aquachronos, Stops, Accesses, Ironies, Scubas, Au- tomatics, Musicalls, Pops, Skins, Squares, Collectors, Olympics, Special packagings, Proto- types, Arts (with run lengths sometimes very limited), Maxis, Accessories… and much more. I appear in the list of top international collectors Swatch watches, at No. 8 in the “World Museum”, the first and only museum in the World Swatch Models, of which I have contributed to, as a member of scientific committee. 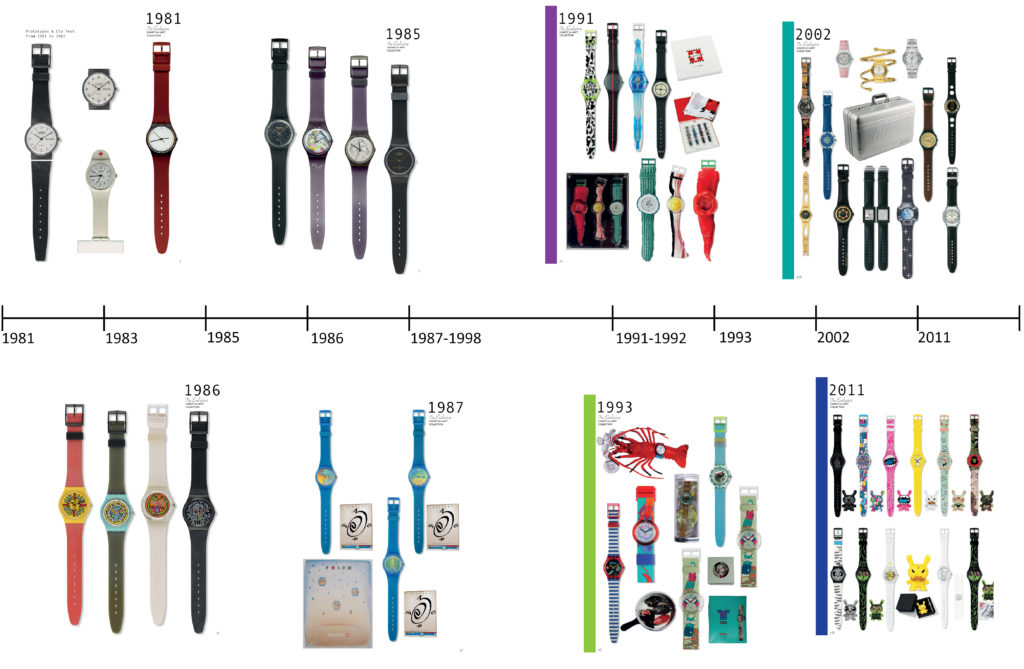 About Ensemble 23 Articles
Ensemble magazine is a bilingual publication associated with Today Sotheby's International Realty with a focus on Architecture, Design, Creative Art and Fine Estates in San Francisco Bay Area and Around the World.
Website Facebook YouTube LinkedIn