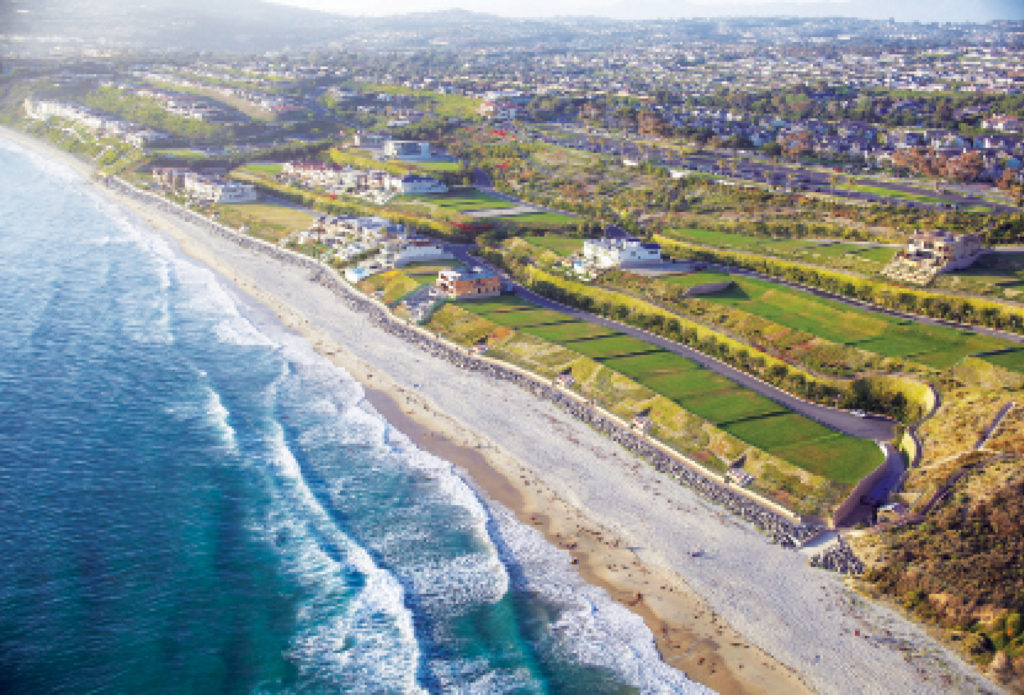 Rich in history, Dana Point has long been an object of appeal in the adventurous eyes of early explorers and subsequent developers for its natural beauty and regal presence. Named after Richard Henry Dana Jr, author of the 1840 classic memoir Two Years Before the Mast, Dana Point is distinguished as “the only romantic spot on the coast” by the author. With one of the few harbors there, Dana’s ship, The Pilgrim, anchored there during his two year voyage and a full replica of Pilgrim now anchors in the beautifully developed modern harbor.

Long a popular port for the cowhide trade, along with neighboring Mission San Juan Capistrano, it was once the scene of a raid by notorious pirate Hippolyte de Bouchard. Dana visited in 1835 and wrote of his experiences in his subsequent novel. Cowhide trade, reaching its peak in the period of 1830 to 1840 was so successful that the cowhides were referred to as “Bank Notes” rather than cowhides and represented the major form of currency during that period. Cowhides brought to port for loading aboard trading vessels were actually thrown from the cliff tops down to the white sandy beach below where they were gathered and assembled for loading.

In 1923, a real estate syndicate was formed by the publisher of the Los Angeles Times, Harry Chandler, and General M.H. Sherman, director of the Pacific Electric Railway Company who then developed what we know of today as the Hollywood Hills. In 1926, along with Developer Sidney Woodruff, they assembled a virtual Who’s Who of investors including Hollywood glitterati into a group named Dana Point Syndicate and acquired 1388 acres comprising what is referred to as “The Headlands” today. A grand vision of a beautifully developed community with tree-lined streets and all the modern conveniences anticipated and began with the completion of about 35 homes in what is now the historic core of Dana Point. Referred to as “Woodruff” homes after the developer, they are situated on streets named, Violet Lantern, Blue Lantern, etc. after the colored lanterns used by ships to advertise their fares as they sailed into port. The grand focus of Woodruff’s development was the Dana Point Inn, an elaborate resort hotel project which included boring a 135 foot elevator shaft to provide service from the cliff top hotel to the beach below. With only the three-story foundation of the hotel completed and the elevator shaft dug, 1929 greeted the Great Depression bringing the project to an abrupt halt and abandonment by 1939. The hotel foundation, elevator shaft, and approximately 34 of the original Woodruff homes continue to stand as relics of this ambitious project.

The tiny village of Dana Point is now a busy marina with quaint shops, restaurants, and the replica of the Pilgrim. It is a departure point for the Catalina Express which provides transport to and from Catalina Island visible on the horizon. Surfers, cyclists, kayakers, paddle boarders, recreational boaters, sport and commercial fishers share the wonderful marina and access to the beautiful beaches, parks, and harbor. A $150 Million revitalization project has been approved for Dana Point Harbor. Enhancement of the marina, which presently has 1400 slips for vessels of 20 to 85 feet in length, will provide accommodations for larger vessels.

Los Angeles Times scion Bruce Chandler and family had continued to own the estate since the 1920’s. For a period Otis Chandler maintained it as a wildlife sanctuary and the family had tried to obtain development approvals for decades unsuccessfully until they eventually concluded that it was time to put it on the market for sale. At that point, the property was neither developed nor accessible; neither exploited for its prime residential potential nor for the enjoyment of it as a natural resource. Enter visionary developer Sanford Edward. Edward acquired the property in 1998 and spent the subsequent eight years bringing his vision of an exquisite ocean front community including extensive preservation of open space and beach access to fruition.

Within 3 days of its launch, 25 of The Strand’s 118 lots averaging $5.9mm were sold. Of the original 118 sites offered, fewer than 40, which includes several ocean front sites, remain available for sale. Sales volume of this quantity at this price point, begs explanation. California’s world renowned ruggedly beautiful coast is zealously protected by the California Coastal Commission with its mandate to protect and preserve this extraordinary national treasure. Development of any coastal property, let alone prime locations, is virtually impossible. The Strand at Headlands is unique in this respect thanks to the vision of Sanford Edward and moreover, his ability to convey that vision to the many stakeholders sharing often opposing interests in it.

Edward created a private ocean front sanctuary in which 118 canvasses are arrayed upon which the fortunate few who acquire one are privileged to create and build their dream homes. Unlike the typical development of this sort, owners are entitled to design according to their unique specifications rather than in conformance with a particular theme or guideline. The only requirement is that each creation must represent excellence in quality and beauty.

The Strand at Headlands is situated within the remaining scope of the original property comprising a small number of legacy homes, a vast expanse of open-space parks, hiking trails, and white sandy stretches of beach. 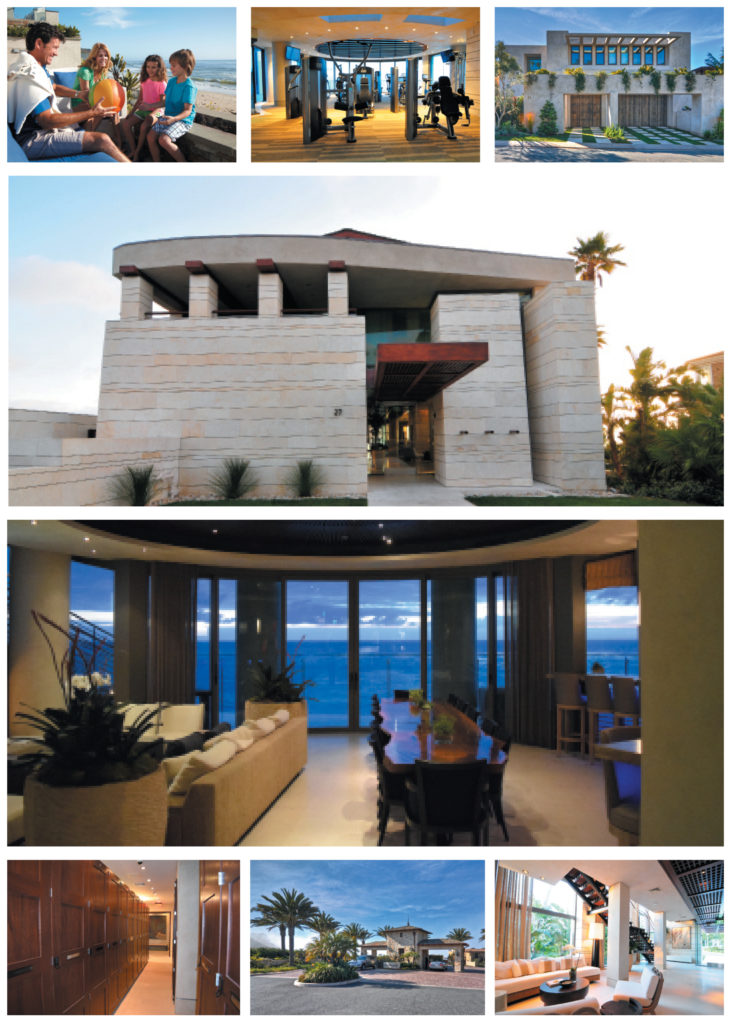 While it is possible certainly to buy an ocean front property and it is possible to build one’s custom dream home, The Strand at Headlands provides the unique opportunity to do both; an opportunity to both acquire a spectacular ocean lot and upon that canvas create and build an exquisite retreat which represents a personal vision and expression of beauty.

Rather than looking like a cookie cutter community of McMansions, The Strand is imbued with the quiet dignity of an established community wherein each home has an elegance and character unto itself, complementing the setting and presenting passersby with exciting examples of traditional, modern, and contemporary architecture.

Owners at The Strand have chosen to build their dream homes here because they realize the rarity of such an opportunity. Many are second homes built as retreats from the cacophonous roar of the crowd to the majestic roar of ocean waves cascading upon the beach. Like the warm embrace of an Hawaiian paradise, The Strand offers the lifestyle and amenities of a far flung paradise with the amazing convenience of mainland, cosmopolitan proximity. Other owners have come here to spend their retirements in a resort-like setting amidst nature’s beauty and the wonderful amenities of The Strand. 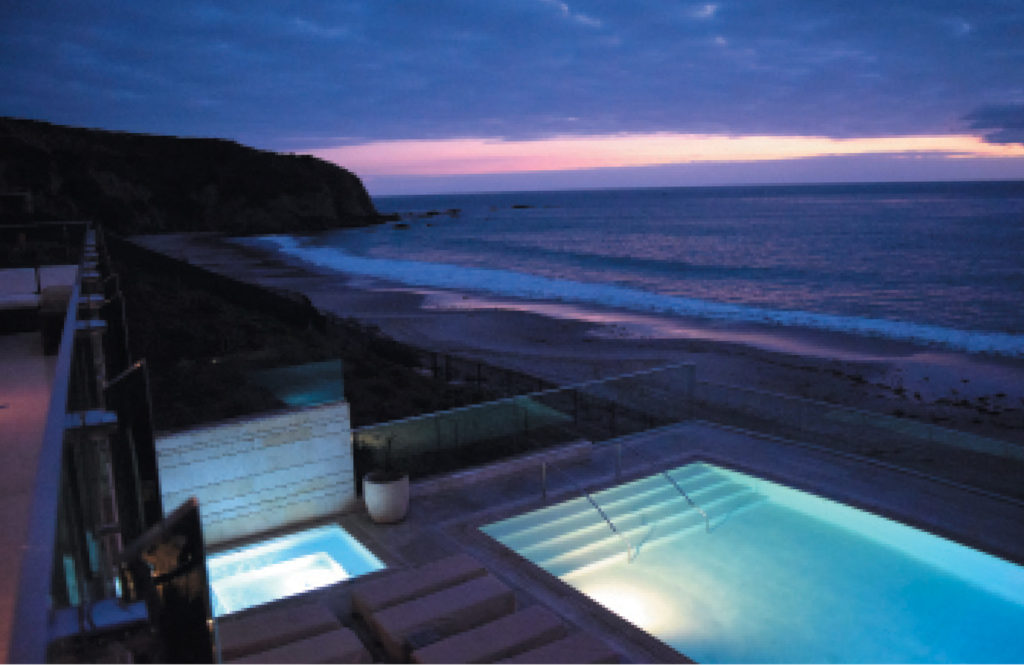 Residents here enjoy the use of the three story ocean front Beach Club designed by award-winning architect Mark Singer, AIA which includes areas for entertaining guests, a state of the art gym with breath-taking views, private lockers for beach and water sports equipment, a swimming pool, and decks on which to simply sit and take in the spectacular sunsets. 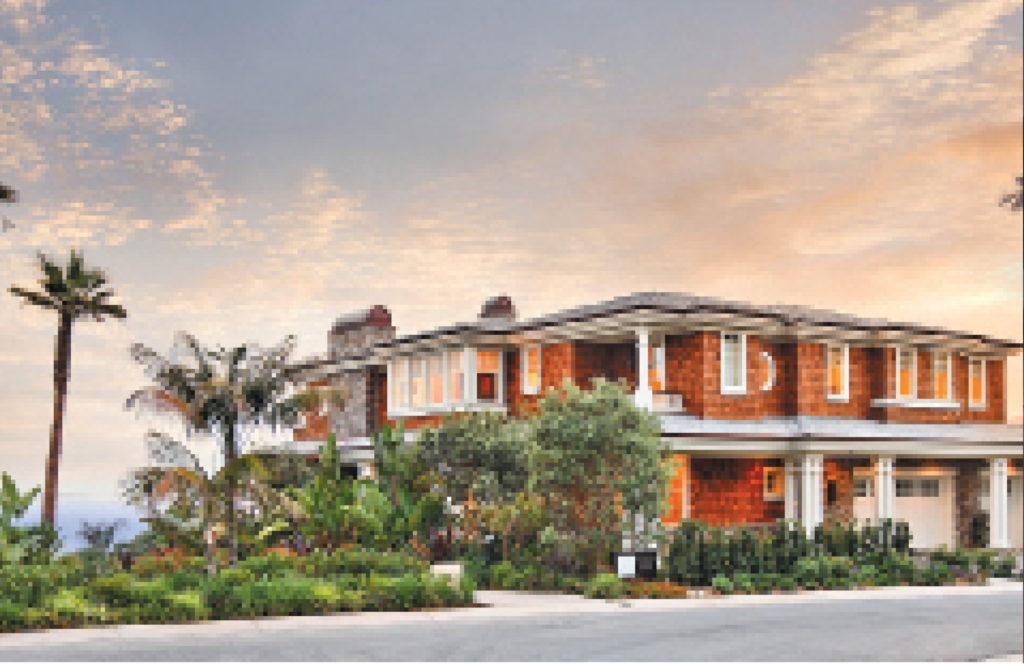 It is literally the last undeveloped ocean front property of its kind in Southern California. The Strand represents a window of opportunity for those who recognize it, a window which, once closed, will not open again.

For an appointment to visit and experience The Strand at Headlands, contact richard.williamson@sothebysrealty.com
Tel: +1.408.940.5088 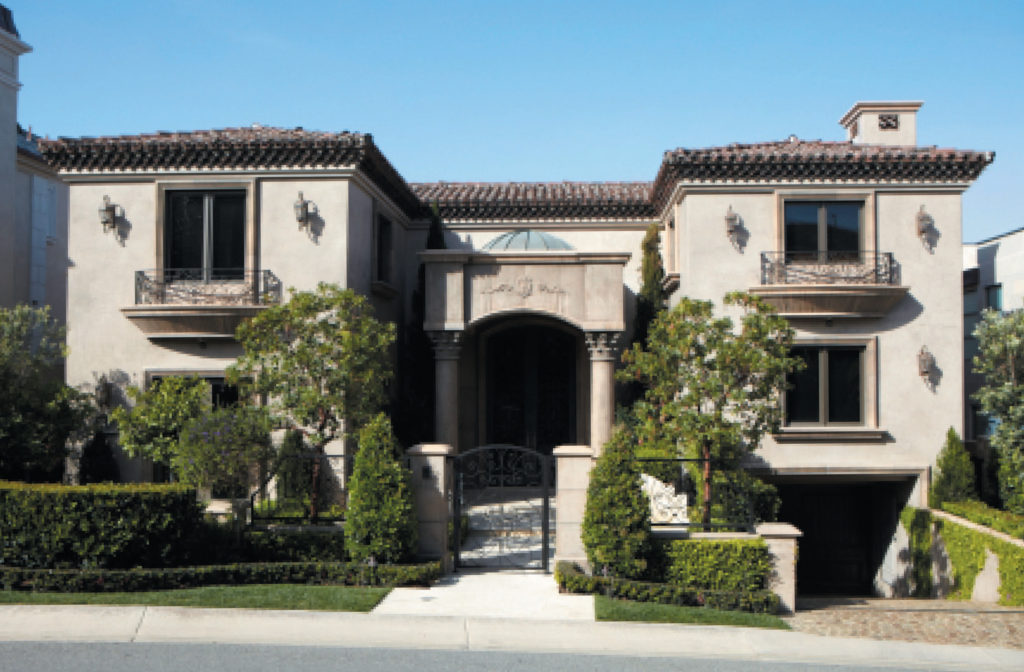 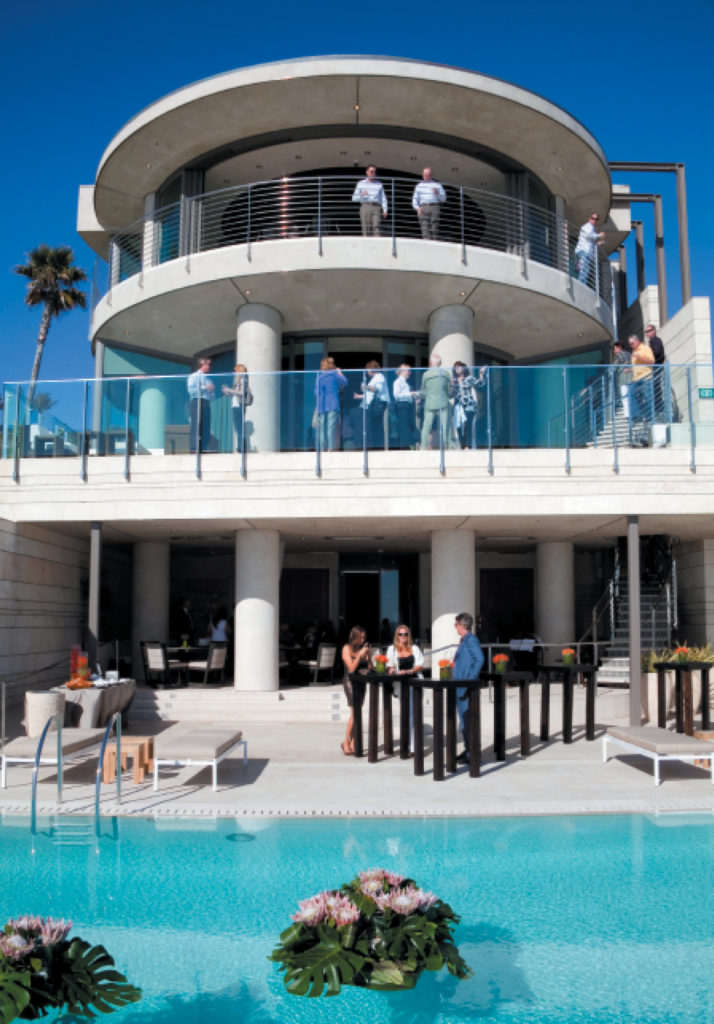 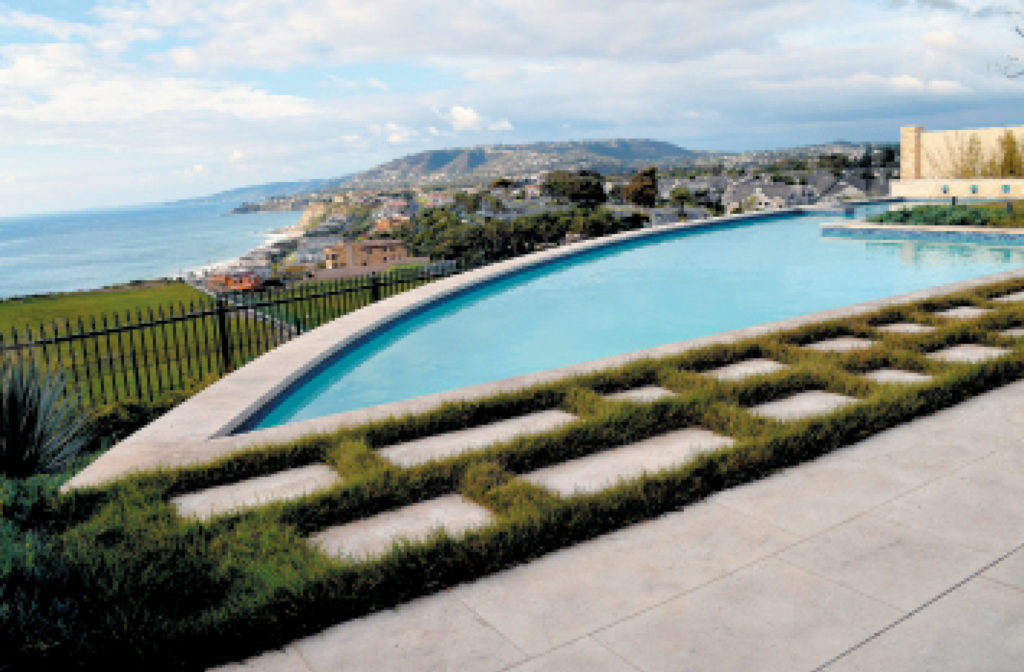 Dubai is the most populous city of the seven emirates in the United Arab Emirates (UAE) with 1,588 sq miles in size and the second largest emirate by territorial size after the capital, Abu Dhabi. […]