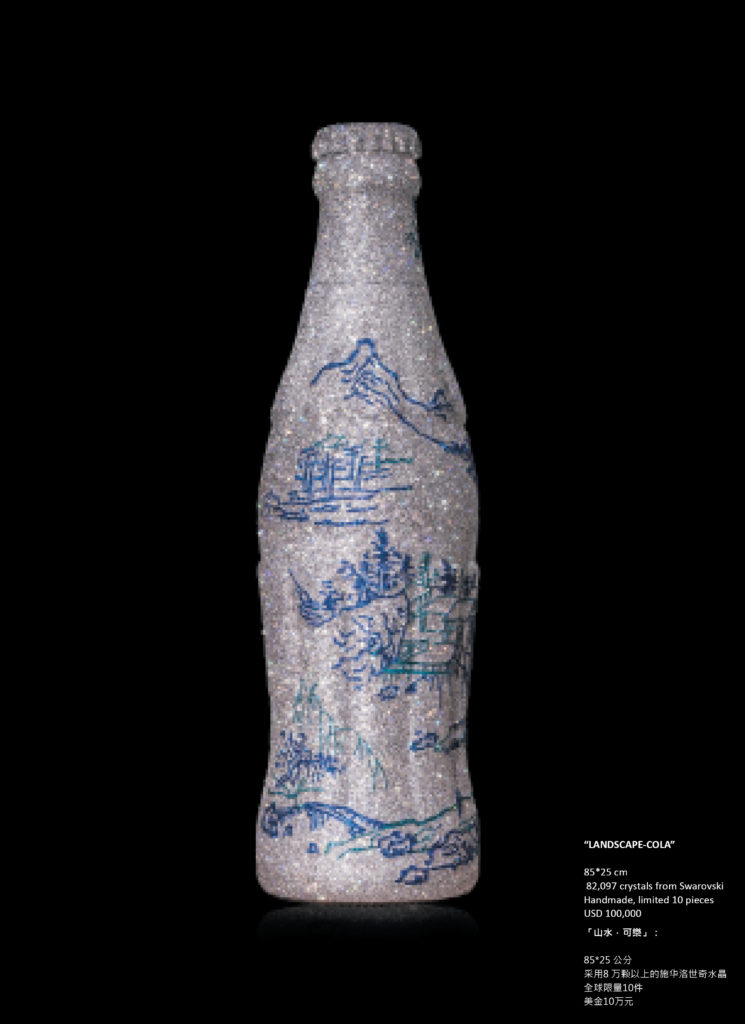 Swathed in a coat of inlaid Swarovski crystals, a shining large Coca-Cola bottle, sapphire blue on its body, accented in green strokes depicts the natural landscape and traditional courtyard houses in Taiwan. It is an enigmatic work which cannot help but puzzle one as to its origin and method.

The “LANDSCAPE-COLA” creation was born of a collaboration between CasaBella and contemporary pop style Chinese artist Xue Song (1). It took the team one year to complete the project. This bold innovative work coupled with production limited to only 10 pieces, has established the work’s value to serious collectors and amateurs alike. Priced at USD 100,000 each, two pieces were ordered when CasaBella launched the artwork in July 2014 by art collectors and within six months of initial offering, only three pieces remained.

CasaBella’s Co-Founder and Director, Jacky Chen, fell in love with the intriguing medium of crystal, metal and sculpture over a decade ago. CasaBella, a Taiwanese brand, was founded in July 2014 by Chen and CEO, Daniel Chang. Prior to founding CasaBella, Daniel Chang devoted himself to the financial services industry for 16 years, during which time he focused on industry analysis and management. During his tenure in the industry he was intrigued by his observations of the rise and fall of numerous brands on the international market. His special insights into the technical side of industry and brand development, combined with a fascination with Asia’s unique cultural history and craft defined a path which lead him to co-founding CasaBella. 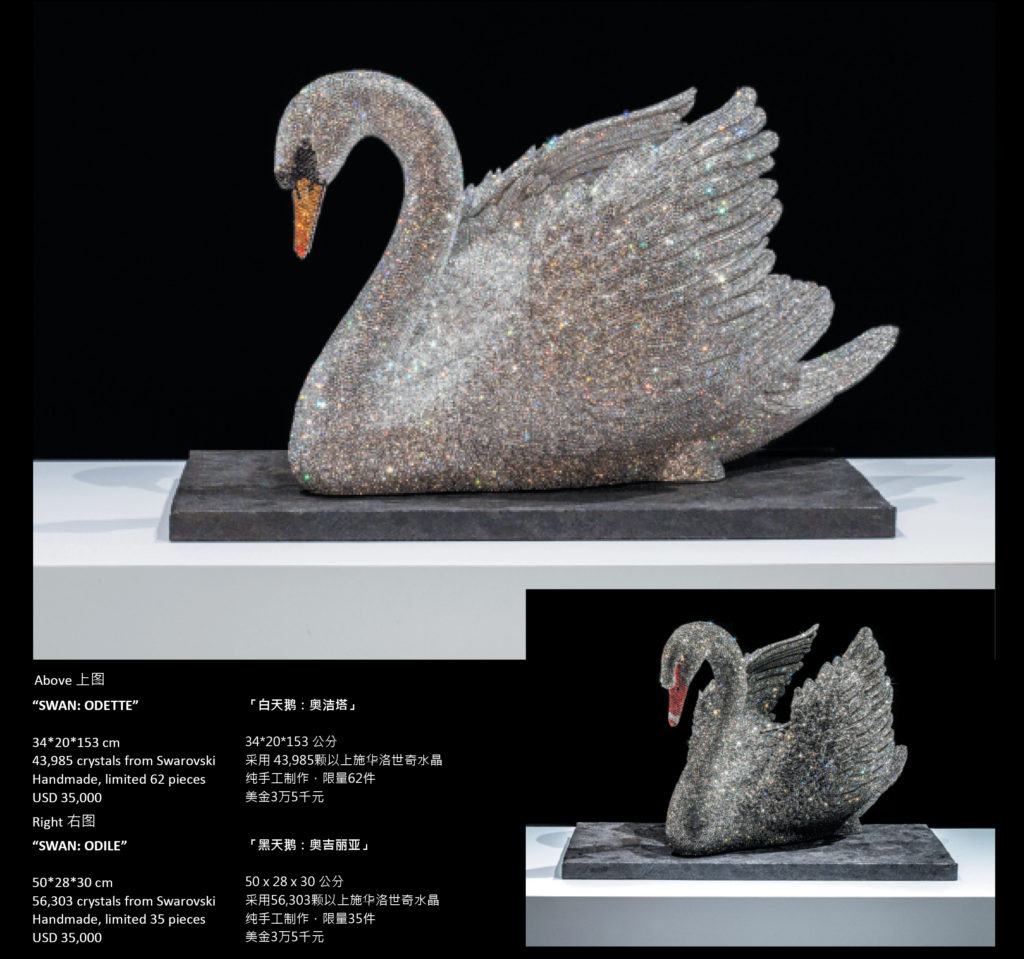 CasaBella’s body of work is an exciting palette from which rise objects exemplifying the expressions of refined art, lifestyle, and precious traditional heritage. Through resplendent, exquisite, unique craftsmanship, art and nature come together harmoniously and impeccably. The voices of East and West as well as deconstruction and reconstruction reveal themselves throughout CasaBella’s artistic creations.

Since antiquity, rare jewelry and luxurious ornamentation have always been the signature symbols of glory and majesty for royalty, from the crown jewels, dress jewelry, royal palace décor and furnishings to tableware. CasaBella’s meticulously crafted “Jewelry for Home” not only symbolizes a regal extravagance but also serves as a glittering, timeless spotlight accentuating the grandeur of life. 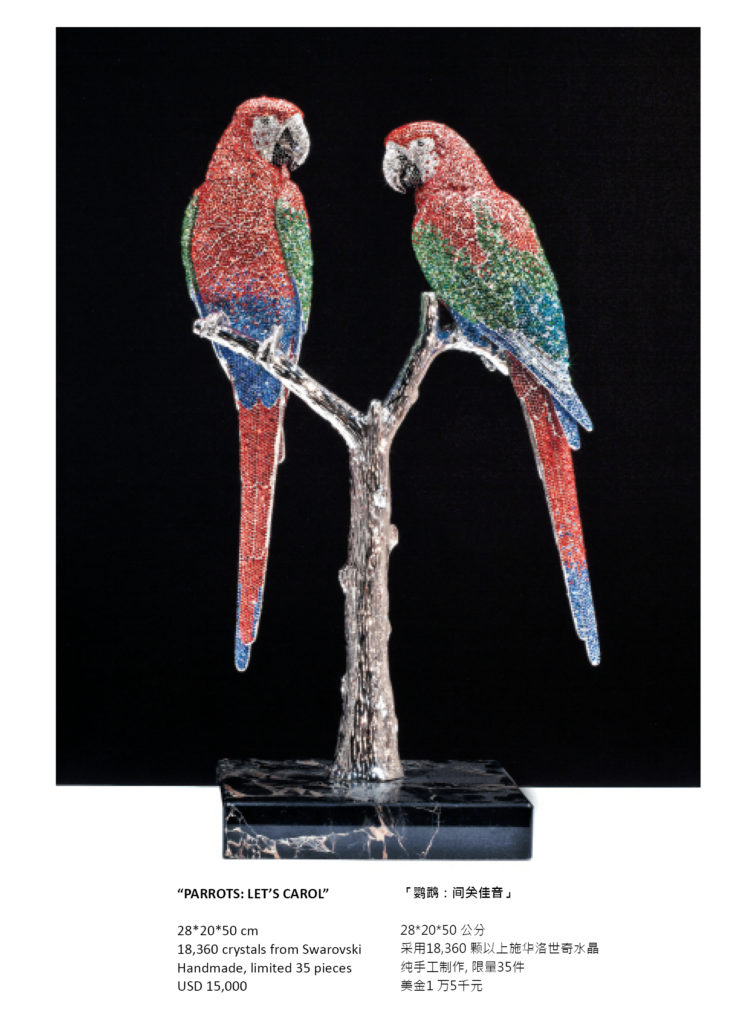 Artistic accomplishment is part of what defines a nation’s honor and dignity. Different styles of artwork emphasize the vision and taste of respective collectors. The value of an artwork is in its appreciation by the discerning collector, while the collector’s personal celebrity and charisma are accentuated by aesthetic enlightenment. CasaBella’s extraordinary body of work derives from the artistic collaborations of independent designers dedicated to creating exclusive artwork collections as well as prominent contemporary artists who are invited to produce artistic creations by employing a combination of crystal, metal or other mediums. Each creation is the culmination of painstaking work, making each an extremely rare and collectible item deserving of refined appreciation. 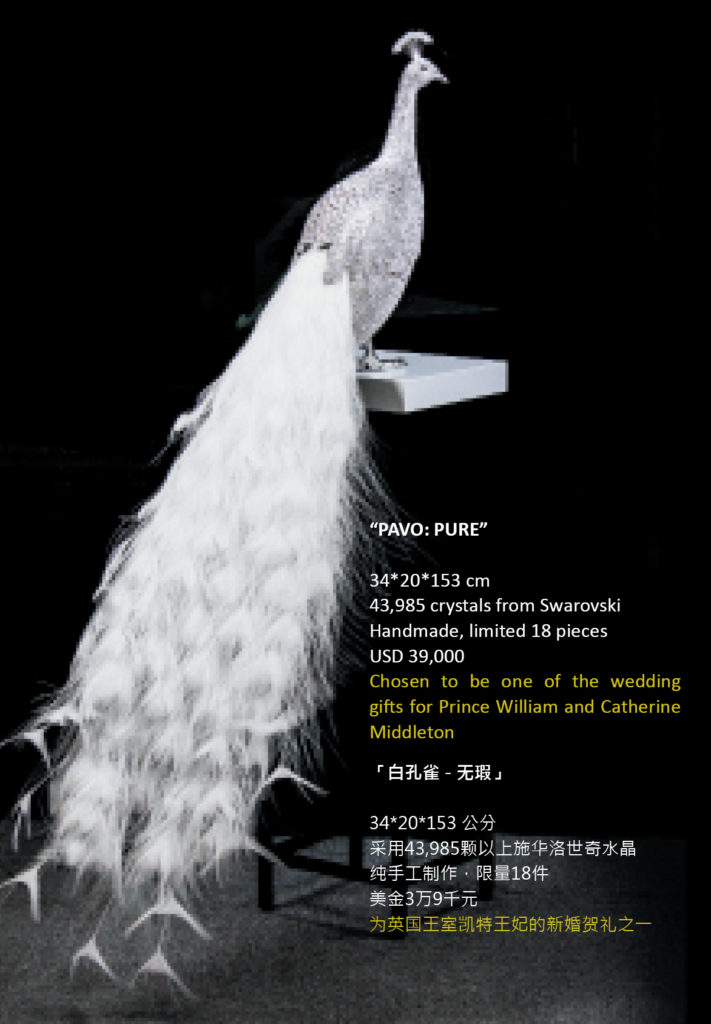 Casabella’s defining principle is to incorporate the timeless culture and heritage of the Orient, the values which are both fundamentally human and uniquely of Asian, into tangible objects, crafted by the hands of exceptional artists of precious material, to become vessels which carry, from generation to generation, a legacy of the core values of life. Through generations of heritage and innovation, the fusion of craft and aesthetics has culminated in CasaBella today. CasaBella is dedicated to crafting treasured heirlooms endowed with these intimate material and spiritual values in tangible form. Creations from CasaBella constantly explore the essence of life together with the influences of immortal classics. The essence of life and tradition are thereby infused in the meaning of the artwork culminating in a timeless, enduring spiritual paradigm which conveys from generation to generation.

In combination with metal and Swarovski crystals, CasaBella’s superb craftsmanship using an exclusive, proprietary MinM (mold in mold) and ConnCraft (seamless joining) technology makes each creation a piece of art.

From the initial drawing, the designer sculpts the prototype model using clay or plaster; carving in detailed lines and texture to bring the work to life. Thereafter, silica gel or plaster is applied to cast the metal blanks, which are handed over to professional artisans for polishing. After the meticulous crafting of the prototype is completed, it is divided into several components, and holes for crystal inserts are individually drilled for each component. Next, CasaBella’s exclusive, proprietary MinM (mold in mold) technology is utilized to produce the mold for the components in preparation for subsequent manufacturing of the artwork. 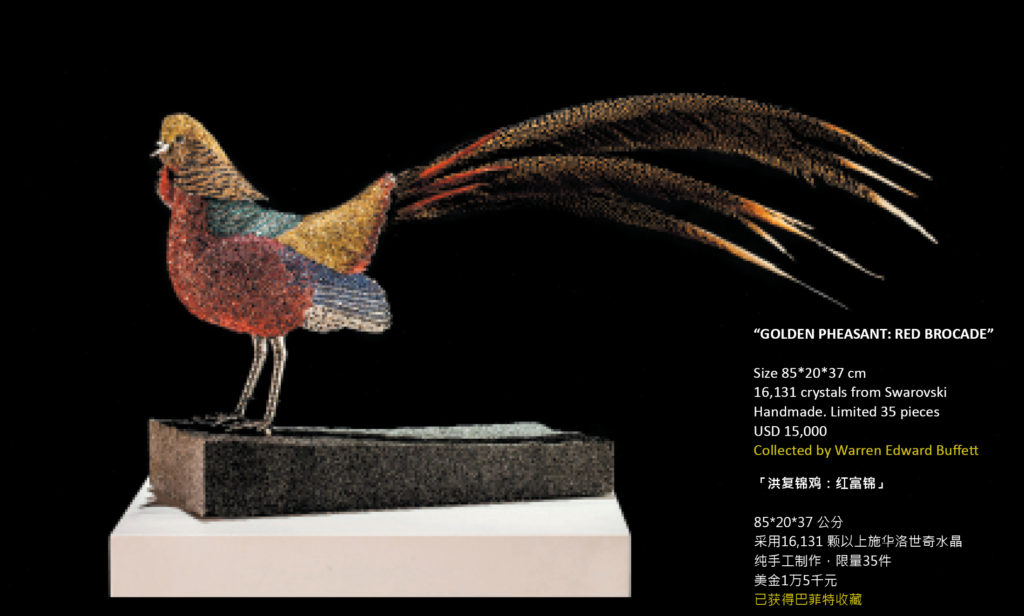 After the silicon mold is made for each component, professional artisans employ CasaBella’s ConnCraft (seamless joining) technology to painstakingly weld, polish and burnish each component before assembling them together. Subsequently, the artwork is handed over to CasaBella’s crystal designer to arrange the crystals and color diamonds in accordance with the crystal’s characteristics. Finally, senior professional artisans will pave the stunning Swarovski crystal. If the artwork is designed with feathers, cruelty-free feathers procured by CasaBella’s in-house designer are handpicked, arranged and assembled with the utmost precision inside CasaBella’s workshop.

Production of each piece, from prototype drawing to the realization of the first finished product usually requires 10 months to 2 years. The most minute details of each object are painstakingly refined with the greatest care. Under the stringent scrutiny of CasaBella’s Director, the designers and artisans work hand in hand to create absolutely gorgeous works of art. 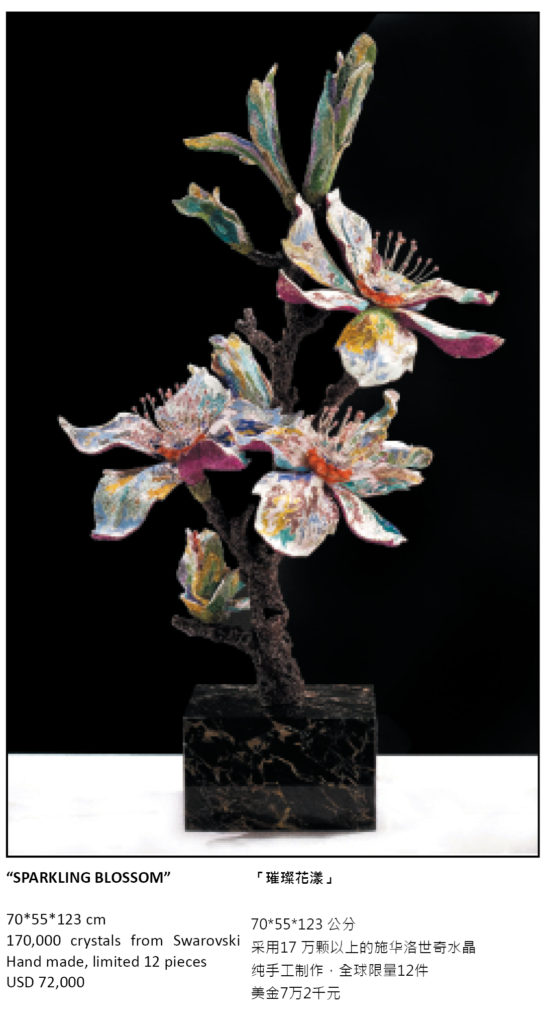 Three collection lines include CasaBella Collection, Flower Collection, and Artist Collection. Luxurious, gracious and joyful birds are the major symbolic themes of CasaBella Collection, such as peacocks and swans. In consideration of the time-consuming production process, the critical dimensional tolerances and aesthetic uniqueness, most of the finished artworks are limited in quantity. To develop Flower Collection products, CasaBella collaborates with Chinese artist Lan Yi, who has studied art in France and currently locates his studio Hai-Lan-Tang in Beijing. As for Artist Collection, inspired by the successful collaboration with artist Xue Song, CasaBella continues to work with a growing number of renowned Chinese contemporary artists for more anticipated masterpieces.

We believe there are many enthusiasts out there who share our sentiments upon first seeing the handmade masterpieces of CasaBella’s art collection – the dazzling crystal artworks exuding absolute beauty and ultimate craftsmanship are simply astonishing and enchanting to look at! The reason they are so unforgettable is attributed not only to CasaBella’s persistence in exquisite craftsmanship or the combination of precious, magnificent materials but also the ability to imbue the aforementioned qualities with a sense of history, society and humanity, so that our ideals can be complemented by more delicate, sensitive aesthetics. 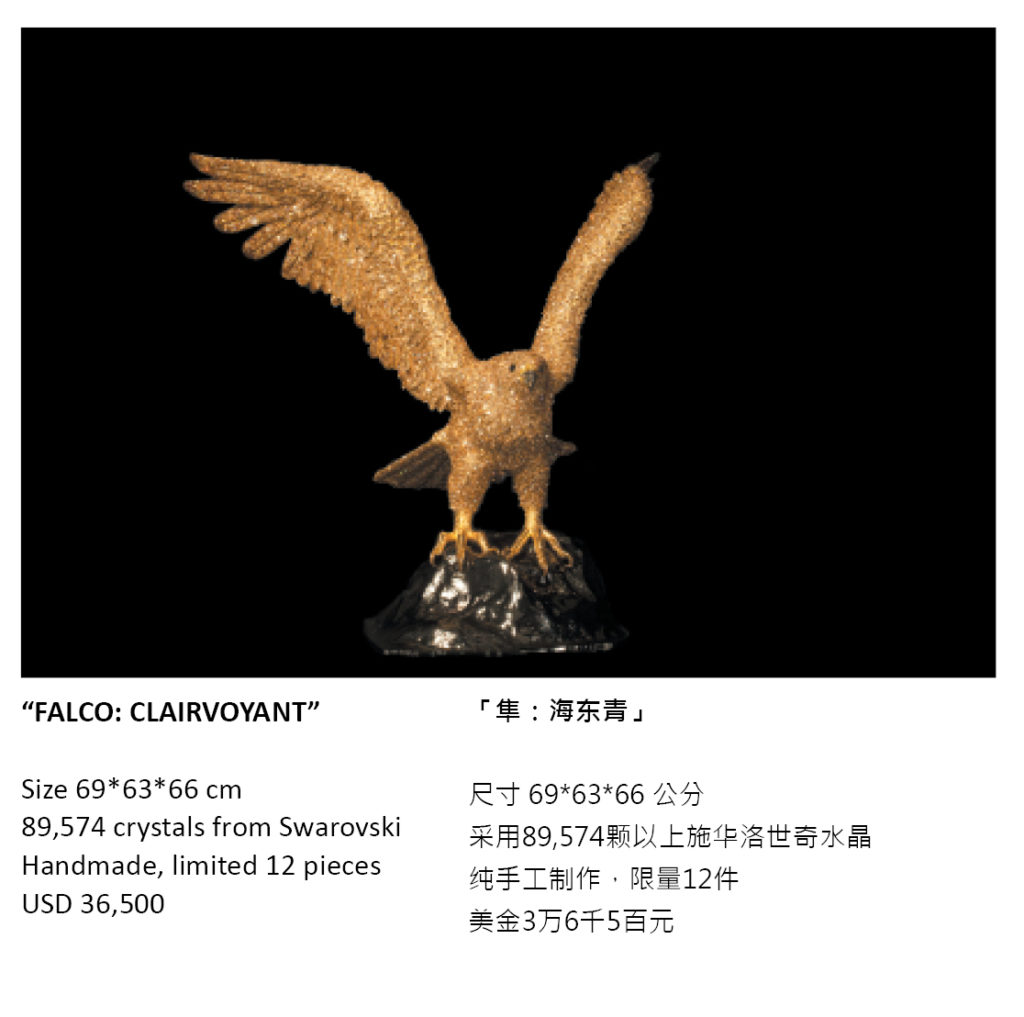 Seen in contrast, perfection beside the mundane, rarity beside the common, one will be able to perceive the essence of spirit through materialism and the transformation of the material into something spiritual. CasaBella intends to convey a philosophy that embodies living heritage, collection and resplendence as the meaning and symbol of life, ultimately attaining the realm of the spiritual, ethics and aesthetics through functionality. Implements created using gemlike crystals and uncanny craftsmanship resemble the culmination of natural creation and human civilization. They not only adorn various aspects of life but also serve as a symbol of life and enlightenment for the profoundness of art. Just as the rich tapestry of stars woven in the limitless sky reflects in the eye of the beholder, the sparkling crystal and diamond creations express the reflection of nature and the touch of heart and hand. This is the ultimate embodiment of “Exquisite Quality – Original Craftsmanship.”