A short distance from San Francisco to the north and Silicon Valley to the south, Hillsborough, California is located on the Rancho San Mateo Mexican Land Grant which was purchased by the Howard family in 1846 who had located there from their home in Hillsborough, New Hampshire. The Howard family, wealthy shipping magnates, made their next fortune in California during the Gold Rush as purveyors of supplies to the multitude of prospectors and mining enterprises at a time when the Howard’s firm enjoyed a virtual monopoly in that business. Over subsequent years Hillsborough was founded and the area became, in the words of one San Francisco newspaper, a “perfumed” community of wealthy San Francisco elite who retreated to their country estates to relax and enjoy hunting, horse breeding, riding, golfing, and other amenities of country life. Located a short distance south of San Francisco and north of Silicon Valley, Hillsborough remains a community of the powerful, affluent, and elite. Distinguished present and past residents include, Singer; Bing Crosby, Publisher; William Randolph Hearst I, Baseball legends; Barry Bonds, Ricky Henderson, and others, Actress; Brigitte Lin, Diet Guru; Jenny Craig, Chef Martin Yan, Morgan Stanley’s Michael Grimes, Electronic Arts’ Larry Probst, and many other luminaries in the banking, investment, entertainment, and political world.

Gentle hills embrace six acres of stately English gardens and a 35,000 square foot residence on the magnificent Tobin Clark Estate. Known as the masterpiece of architect David Adler’s body of work, the construction was commissioned by Celia Tobin Clark in 1929 and completed in 1931. No expense was spared in completing the project, which was inspired by England’s Cotswold Tudor estates. The many gardens and winding pathways provide an island of solitude and beauty overlooking the mystical hills, canyons, and San Francisco Bay. The Estate has been a frequent host to prominent world leaders, many standing U.S. Presidents, and numerous gala celebrity events. Among the numerous celebrities who have resided as guests here are. Presidents Ronald Reagan, George H. W. Bush, Gerald Ford, Richard M. Nixon, Prime Minister Margaret Thatcher, and His Majesty King Hussein of Jordan. This is a rare opportunity to acquire an estate of unique architectural and historical significance. 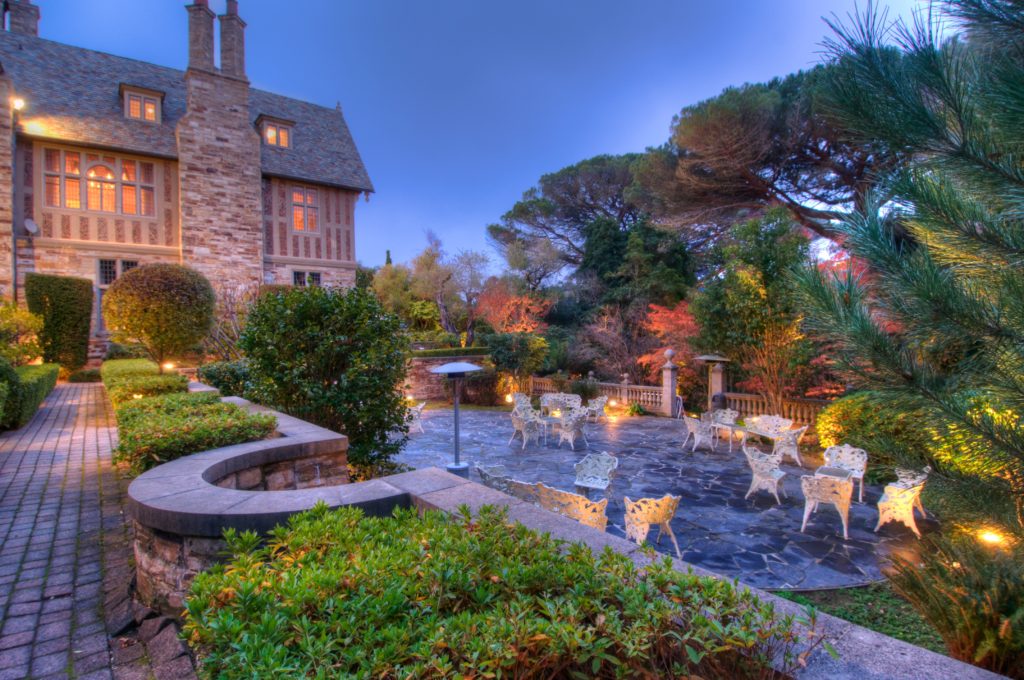 Mrs. Celia Tobin Clark was a member of an old and distinguished San Francisco family which made its fortune in the founding of Hibernia Bank, one of the largest financial institutions at that time. Celia married Charles W. Clark, son of Senator William A. Clark of Montana, whose family fortune was made in the copper industry. Mr. & Mrs. Tobin Clark initially built their residence, El Palomar, in an area situated closer to what is now the El Camino Real and, when their marriage dissolved, she set aside 250 acres in a more secluded location up on the hill for the purpose of the commissioning of her new home. As a consequence; the Tobin Clark Estate eventually became known as “House-On-Hill”. exists today as part of the parish school.

Initially Mrs. Clark looked to her friend, San Francisco architect Arthur Brown, Jr (1874-1957) to create the design. However, Brown, who had designed the San Francisco City Hall and the War Memorial Opera House, presented a design of a large French chateau sitting imposingly on the hilltop which was the opposite of the secluded retreat which Celia Clark desired. She then turned to David Adler (1882-1949) to design the home of her ideal. This was to be David Adler’s first work as an independent architect, his most expensive project, and what ultimately became known as the masterpiece of his entire body of work.

Adler and Mrs. Clark traveled together through Europe looking for design inspiration and furnishings for this new estate and while there acquired a number of the key elements still present today such as the library paneling attributed to Grinling Gibbons (1648-1721) the English wood carver and sculptor whose work, commissioned by Sir Christopher Wren, can be seen also in St Paul’s Cathedral, Blenheim Palace, and Hampton Court Palace. Gibbons is still regarded as the finest wood carver in England and the only one whose name is widely known by the public at large. Parquet d Versailles flooring, limed oak paneling, and cabinetry brought from European estates for the project are evident throughout the mansion. This was to be, for Mrs. Clark, a project of great passion and focus. In 1921, in anticipation of its development, she had transplanted trees from as far away as Italy in order to insure a mature and beautiful landscape. 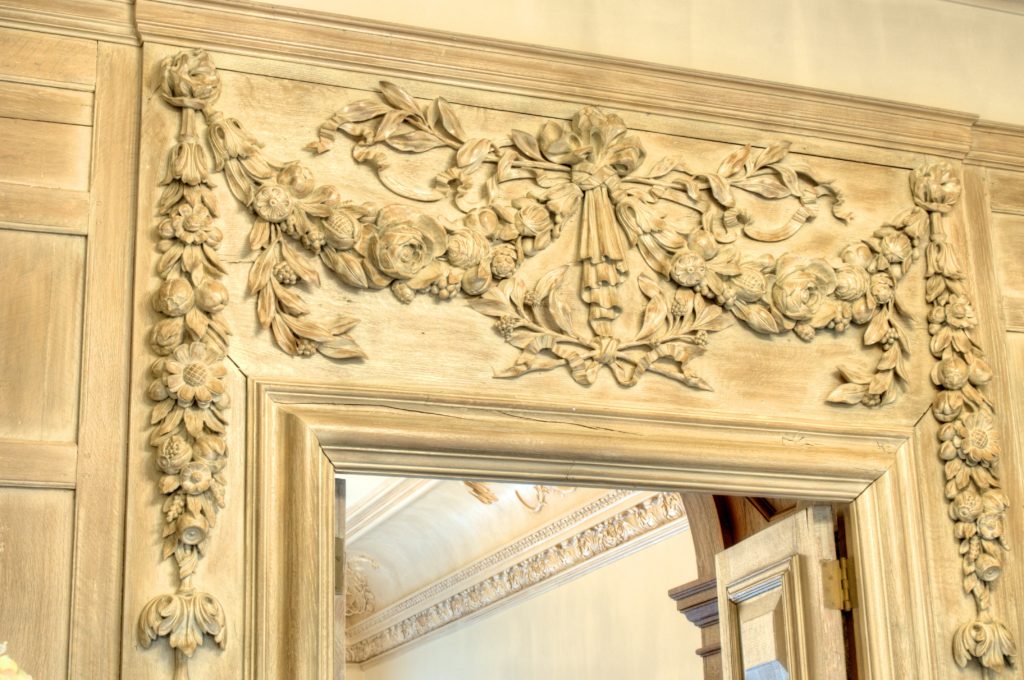 The construction of the home began in 1929, the year of the Great Depression. Because of the economic distress at that time, hand labor was employed wherever possible providing much needed jobs for local workers. The entire excavation was dug by hand and a failed local wood-planning mill was able to re-open to provide oak planks for a $160,000 order by Mrs. Clark. All told, the completed construction is estimated to have been approximately $1,500,000 (over $20 Million in today’s dollars).

Mrs. Clark’s vision of a secluded, inconspicuous home was well realized in Adler’s design. As one approaches the home past the Gatehouse and up the approximate quarter mile long cobblestone drive, the house emerges from behind the gentle slope. In the motor court, an almost perfect square decorated by a beautiful fountain at its center, the grandeur of the full size of the home is not yet revealed as only main and upper elevation is visible. The warmth of its Carmel stone walls harkens to England’s Cotswold Tudors. Though inspired by historic design, Adler, by tucking features such as the garages into the hillside, conceals the more modern aspects of the property. The personality of the property has a surprising effect as one only realizes the full magnitude of the home from the rear as it rises up in its full 3 story grandeur and commands a view of the hills, canyons, and valleys below. In this south court, one enjoys the absolute peaceful solitude which Mrs. Clark desired.

Upon entering the mansion, one is transported to a time of graceful dignity. The harlequin patterned black and white marble tiled Reception Gallery gives no hint of the expansive world within. Jacobean oak paneled walls reach east and west to doorways adorned with hand-carved swaged reliefs which lead to the east and west wings of the home. A towering wall of leaded glass illuminates the spacious stair hall which beckons to the Music Room, Library, Dining Room, and Bar below. 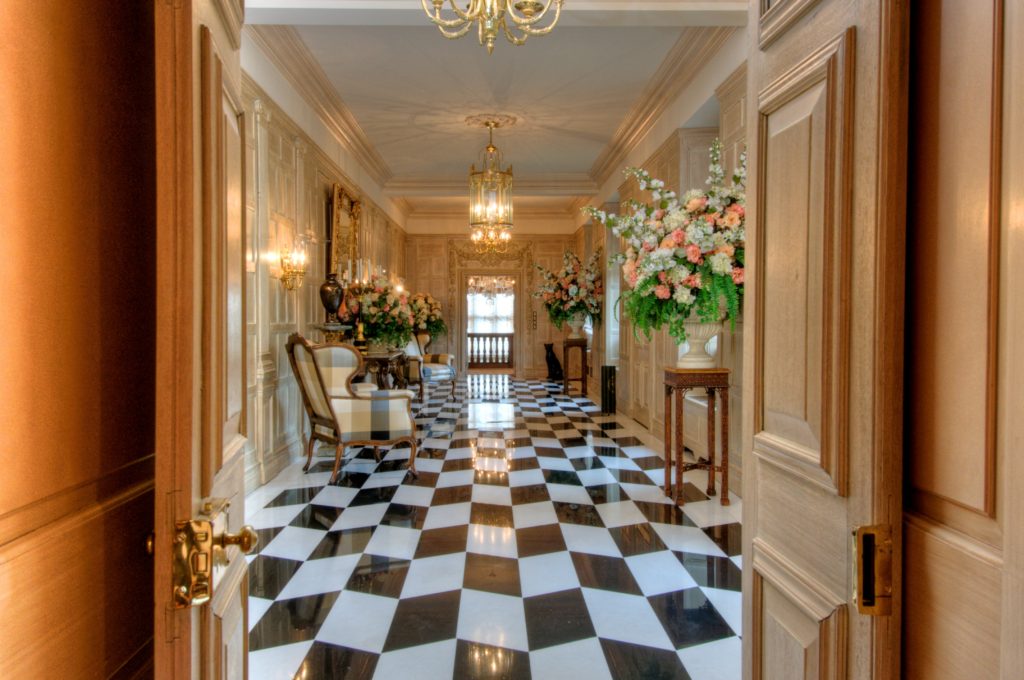 The Music Room measuring twenty-seven by fifty-five feet echoes of the music of world renowned musicians including the Budapest String Quartet, the Pro Arte, Flonzaly, and Lener quartets who often performed for more than an hundred guests. As acoustically perfect as it is beautiful, a musician of the time stated “It was like playing inside an instrument’. Ingleman spruce panels hand carved by local artisans grace the walls, the high plastered ceiling adorned with ornate rosettes, garlands, and musical instruments, triple-gilt ornamentation, and rare antique oak Parquet de Versailles flooring imported from France by Mrs. Clark bring a character unmatched in modern design. 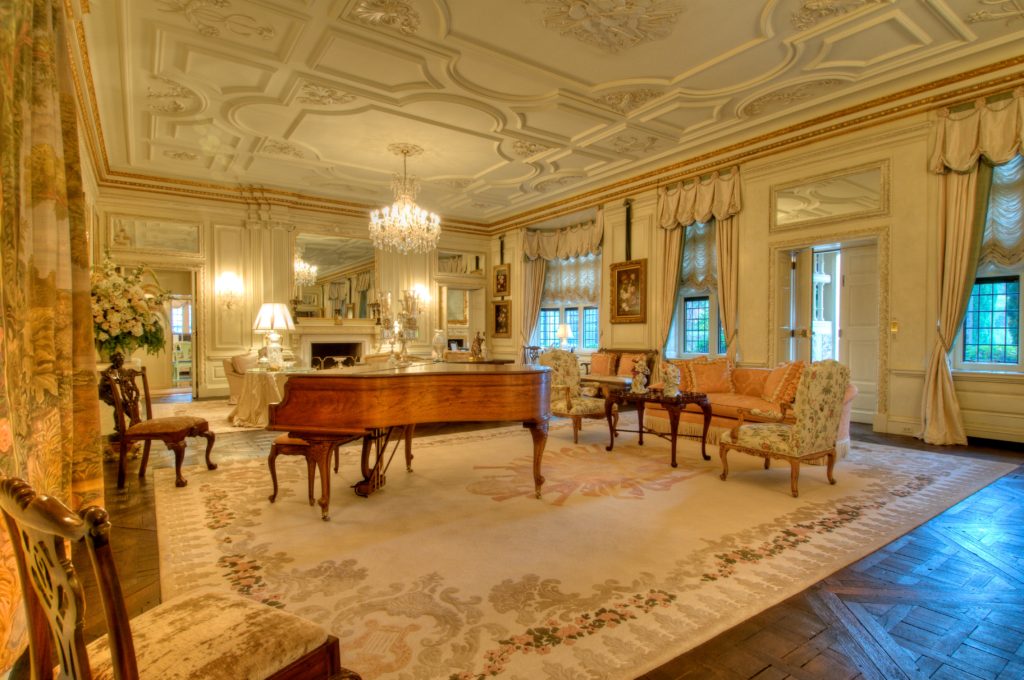 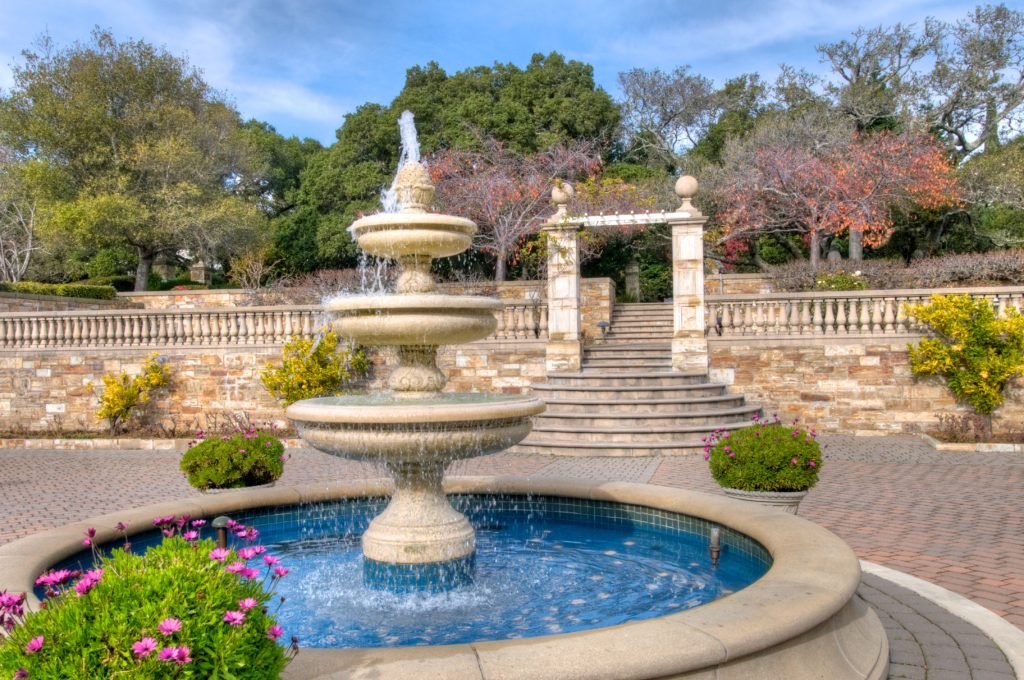 It is not often that one has the opportunity to acquire an estate of such architectural and historical significance. The present owner’s painstaking $19,000,000 investment in restoration and modernization of this architectural jewel is evident in all respects. Once the inconspicuous retreat of Celia Tobin Clark, resting now on the gentle hills overlooking San Francisco Bay, its serene seclusion and beautiful natural surroundings belie its location in the very heart of the most dynamic, economically and culturally significant locations in the world.